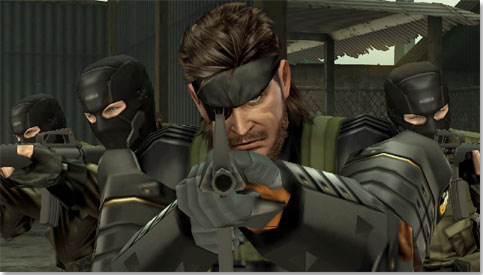 Metal Gear Solid: Peace Walker is out this week in North America. As director Hideo Kojima revealed in April, the game received a “Teen” rating from the ESRB, as opposed to the “E for Everyone” rating he would have preferred. At the time, Kojima stated that, while the bloodshed in the game had been toned down to suit the PSP audience, the plot still revolved around serious anti-war themes and preserved the world of Metal Gear.

Peace Walker’s “T” rating is in contrast to nearly every other Metal Gear Solid “M.” We decided to take a look at what the ESRB thought of the game:

This is a stealth-based action game in which players assume the role of Snake, an elite soldier investigating a military presence in the jungles of Costa Rica. Players engage in various missions by sneaking past guards, incapacitating enemy soldiers with a tranquilizer gun, and performing hand-to-hand takedowns in close-quarter combat. Players can also use machine guns, pistols, and rockets to kill enemy soldiers and destroy vehicles and robots. When enemies are shot, a brief red particle effect is displayed. Black-and-white comic book-style cutscenes sometimes depict instances of torture: The central character is repeatedly shocked by electric rods; the silhouette of a tortured soldier depicts red blood dripping from his nose and mouth. Players can also engage in extra missions (“extra ops”) that involve dating either a male or female character: Players can take pictures of their female dates in bikinis, touch a character’s breasts, or lie on top of him or her on the beach. If players enter a cardboard box (“Love Pack”), a rustling motion and moaning sounds occur. During the course of the game, characters reference drugs in dialogue (e.g., “drug refining plant,” “drug money,” and “narcotics plant”); words such as “bullsh*t” and “b*tch” can also be heard.

Additionally, the North American version of the game also contains a certain scene that was removed from the Japanese build, in order to avoid a CERO “D” rating. Unfortunately, there are no rating summaries available for previous Metal Gear games to compare Peace Walker to. However, we did compile quick chart comparing the content descriptors of Subsistence, Guns of the Patriots and Peace Walker.

You know, maybe the ESRB should consider doing video ratings, even though it would take more time and effort. After all, how do you explain something like this via a content descriptor?