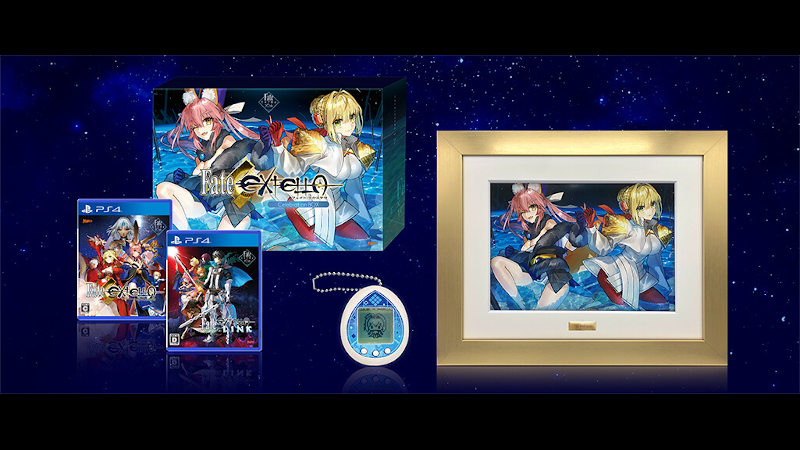 Marvelous revealed the release date and price of the Fate/Extella Celebration Box. It will be released in Japan on February 11, 2021 at 19,800 yen (~$188) plus tax. The box will be available for two different platforms, the PlayStation 4 and Nintendo Switch. It will contain both Fate/Extella: The Umbral Star and Fate/Extella Link copies for the same platform, as well as an A5-sized Fate/Extra 10th Anniversary illustration by Arco Wada.

The main highlight of this collection box is the exclusively limited Extellatchi, a collaboration Tamagotchi made by Bandai. More new details on the Extellatchi have been revealed after the initial reveal in July 2020. The list of Servants confirmed in the Tamagotchi so far includes even the Caster Hans Christian Andersen, whose only direct appearance in the Extra series so far is in Fate/Extra CCC.

You can feed Yakisoba Pans to your Servant, treat them with Roll Cakes as snacks, remove bugs by using Code Casts, or train them by fighting against enemy programs. However, if you treat the Servant poorly, they will eventually leave and be replaced by another Servant of a different class.

Marvelous also published a new promotional trailer for the Fate/Extella Celebration Box, which you can watch right below:

Fate/Extella, known in the West with the subtitle The Umbral Star, depicted the story after Fate/Extra with a Dynasty Warriors-like action genre. Fate/Extella Link is the side-story sequel to the former that added even more characters. Both games are immediately available on the PlayStation 4, PlayStation Vita, Nintendo Switch, PC, and mobile devices.