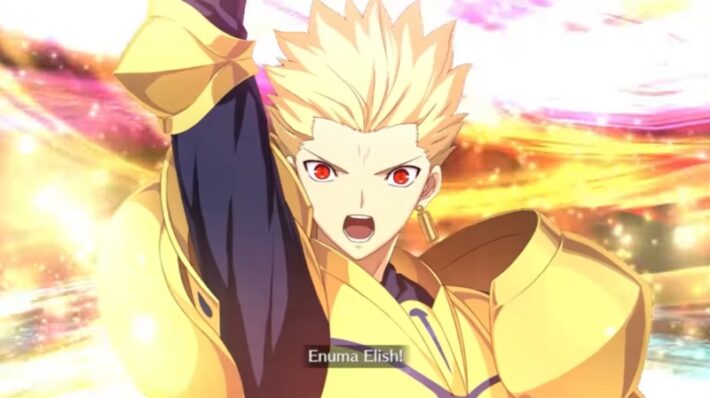 Aniplex and Delightworks have uploaded the first in a new series of videos features promoting mobile RPG Fate/Grand Order. The first episode of “Developer Diary” features a message from Cosmos in the Lostbelt director Yoshiki Kanou, as well as a number of teases for upcoming content and changes to the game system.

The Fate/Grand Order developer diary video opens with Kanou teasing the upcoming event, Battle in New York 2021. This event is a modified redux of the 2020 event of the same name, with updated quests. As before, it is a challenge-oriented series of quests, designed to test players with high-difficulty battles and demanding scenarios. The Battle in New York 2021 event will also be accompanied by a visual update for the 5-Star Archer-class Servant Gilgamesh. The update will revise his Noble Phantasm sequence, as well as his standard attack animations to bring Gilgamesh’s visuals more in line with Fate/Grand Order‘s graphical upgrades. Kanou also announced a special Back-to-School promotional campaign, starting on September 1st, 2021. In mid-September it will update with new promotions. The campaign will give players a chunk of Saint Quartz and the opportunity to earn the “Memories of the Lunar Sea” Mystic Code for its first half.

Other changes previewed by Kanou in the Fate/Grand Order developer diary fall under the category of “Quality of Life” changes that improve the game’s functionality and user experience. More than 30 new functions and improvements are due for implementation. Some include the ability to copy “Support Set” Servant lineups. Support Sets are what other players see when selecting a support servant to assist in quests. Servant voice clips will also be accessible from the Records section of the My Room menu, rather than just in each Servant’s profile. Servant search and sorting filters are also getting a full overhaul. Players will be able to sort their Servants based on criteria like targeting qualities or element of their Noble Phantasm. Visuals for status effects have been revised to make them easier to read at a glance.

Finally, the Fate/Grand Order developer diary promoted a multimedia announcement for international FGO fans: Aniplex will air the Fate/Grand Order The Stage – Divine Realm of the Round Table, Camelot stage play via streaming. A stage adaptation of FGO‘s 6th Singularity, the show was exclusive to Japan prior to the announcement. Camelot was also adapted into a two-part feature film by studios Production I.G. and Signal.MD. Studio Cloverworks adapted the 7th Singularity, Absolute Demonic Front Babylonia into an anime series, and will also produce the final Singularity, Solomon, as a feature film.