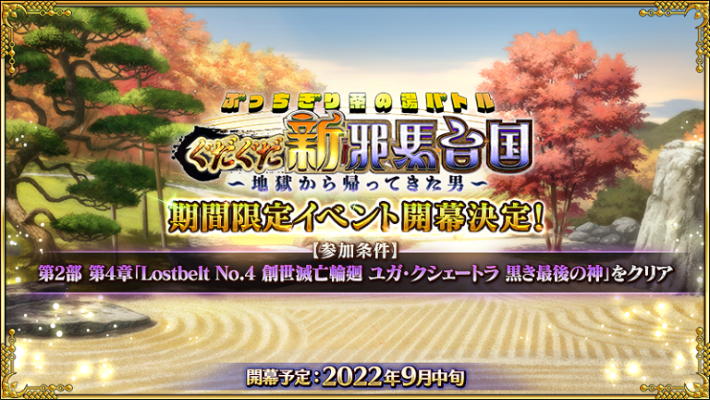 Lasengle has hinted at a new upcoming Gudaguda event for the Japanese server of Fate/Grand Order. The event’s name is “Overwhelming Tea Ceremony Battle: Gudaguda Shin Yamataikoku – The Man Who Returned from Hell –.” It will debut in-game from mid-September 2022. [Thanks, Gamer!]

So far, there is very limited information on the new Gudaguda event. Gudaguda Servants such as Nobunaga, Ryoma, and Okita will receive bonuses. These bonuses will allow them to deal more damage, as well as gain more bond points per battle. More information will appear during the Gudaguda Shin Yamataikoku Chaldea broadcast. It will air on September 14, 2022 from 19:00 JST, which is 3:00 AM PST/6:00 AM EST.

Check out a teaser for the broadcast below.

The Shin Yamatai-koku event will be a continuation of the one that originally came out on the Japanese server in 2020. Coincidentally enough, the North American server will debut the localized version of the Yamataikoku event from September 14, 2022. This event will introduce new Servants Himiko (Ruler) and Saito Hajime (Saber).

In order to access the Shin Yamataikoku event, Masters will need to have first completed Lostbelt No. 4. It is unknown if there will be a free Servant to obtain from this event. Finishing the story for the first one did not garner players a new addition to their roster. Instead, the first Yamataikoku event placed Nobukatsu in the free summoning banner for a limited time.

The Overwhelming Tea Ceremony Battle: Gudaguda Shin Yamataikoku event will debut in mid-September 2022 on the Japanese server of Fate/Grand Order. More information will appear on September 14, 2022. Fate/Grand Order is available on mobile devices.