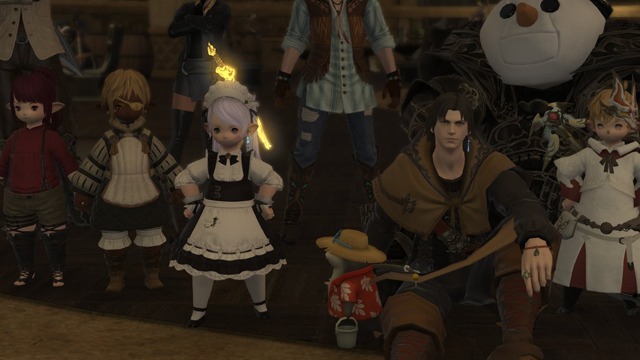 Final Fantasy series creator Hironobu Sakaguchi announced he began playing Final Fantasy XIV. Sakaguchi took to Twitter to share his adventures and is currently experiencing the beginning of the A Realm Reborn base game. He confirmed he met up with Yasumi Matsuno, writer of Final Fantasy Tactics, within the world of Eorzea. Matsuno posted a picture of their characters standing together at the Quicksand located in one of FFXIV‘s starting cities. These tweets come just days ahead of Sakaguchi’s joint presentation with FFXIV Director and Producer Yoshi-P at TGS 2021

So far Sakaguchi has documented a fair bit of his time in FFXIV on Twitter. This has included pondering over which Data Center or server to join. He’s shared several screenshots of his character. Another tweet revealed that Matsuno has been ferrying Sakaguchi through the early areas of the game with the help of one of the two-seater mounts.

As mentioned previously, Sakaguchi will join Producer Yoshi-P during TGS 2021 for a presentation discussing the potential of the RPG genre. Both Sakaguchi and Yoshi-P will discuss the appeal of the genre, and how it could potentially evolve in the future. The broadcast will take place on October 2, 2021. It will also feature English and Chinese interpretation.

Final Fantasy XIV is available for the PS4, PS5, and PC.