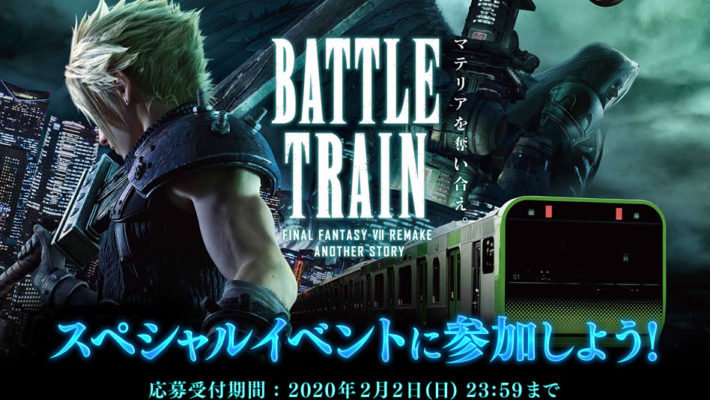 Square Enix has made the decision to cancel the  Final Fantasy VII Remake Another Story Battle Train event, which was would have been held on February 22, 2020 in Tokyo. The Battle Train was a free promotional event to build excitement for the 2020 release of FFVII Remake’s first episode. [Thanks, Game Watch!]

The event was set to be held on the Yamanote Line in Tokyo, which is a central line that circles around to some of the city’s most popular areas, including Akihabara, Shinjuku, Harajuku, and Ikebukuro. However, the event was discontinued due to rising concerns about the COVID-19 coronavirus outbreak in Japan.

Square Enix did make preparations to ensure a clean and safe environment on the trains. However, the company ultimately decided that the risk and concern of potential infection was too high.

The Final Fantasy VII Remake Battle Train would have used players smartphones to lead them on an interactive treasure hunt. Further, it was a completely free event that participants could have applied to participate in. Up to 280 players could participate and receive a souvenir.

Additionally, there was a campaign planned alongside the event where 77 lucky participants could win a lottery prize via Square Enix’s Twitter. Currently, participants who completed their applications for the game are eligable for the lottery.

This the second coronavirus-related cancellation from Square Enix in February 2020. The company also canceled some of its PAX East 2020 activities. (So did Sony.)

Final Fantasy VII Remake’s first episode will launch on April 10, 2020 for the PlayStation 4.