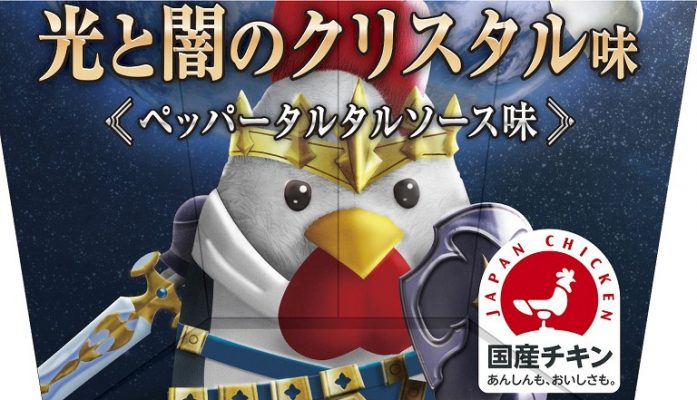 Lawson and Final Fantasy XIV will have yet another collaboration event, but this time with Karaage-kun fried chicken. You will be able to order Karaage-kun, which is Lawson’s brand of convenience store chicken nuggets, in “Crystal of Light and Darkness” flavor for a limited time. Other promotional campaigns will appear in August. [Thanks, Ryokutya2089!]

According to the Lawson website, the Crystal of Light and Darkness flavor is a combination of two condiments. The darkness comes from the black pepper and the light comes from the tartar sauce. The black pepper and tartar sauces are inside the chicken, similar to a cream puff. Currently, the Final Fantasy XIV Karaage-kun is not yet available, as it is part of an upcoming promotion. There is no concrete release date on Lawson’s website or Twitter.

In November 2020, Lawson had a collaboration with Final Fantasy XIV during which buying chocolate in a Lawson could get you a Chocorpokkur mount in-game. This same promotion became available in North America and Europe in May 2021. People who bought at least $5 worth of Butterfinger-branded candy could obtain a Chocorpokkur mount. The promotion recently ended on June 30, 2021.

Final Fantasy XIV is readily available on the PlayStation 4, PlayStation 5, and Windows PC. The Final Fantasy XIV “Crystal of Light and Darkness” Karaage-kun flavor will appear for a limited time in Lawson convenience stores in Japan. Lawson’s Twitter account will continue to post updates on their collaboration content.