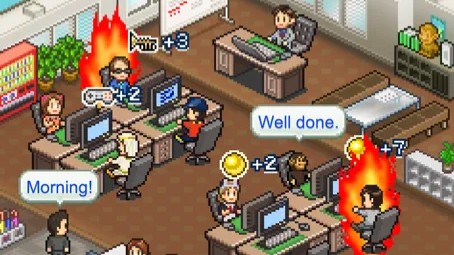 Back after its big April 2021 update, Apple announced that Apple Arcade would begin getting versions of noteworthy and well-known past games. For example, Cut the Rope Remastered and Mini Metro + appeared. Now, Kairosoft announced that Game Dev Story ++ is available via Apple Arcade as well in the App Store Greats section.

Game Dev Story is one of Kairosoft’s first simulation games. While it first appeared on PCs in Japan, it didn’t get a worldwide release until it showed up on Android and Apple iOS devices in 2010. Your goal is to guide an indie developer until they make it to the big time. You hire and train staff, create games, learn about new types, attend trade shows, and perhaps even eventually create your own consoles.

The Apple Arcade version of Game Dev Story doesn’t appear to add any new features of any kind. However, it is the full game. The other versions available allow you a demo that lets you play for a few years for free, but require a person to pay to keep playing past a certain point. It is available in 14 languages.

Game Dev Story is now available on iOS devices via Apple Arcade as an App Store Greats title. The game is also available on Android devices, the Nintendo Switch, and the PlayStation 4.