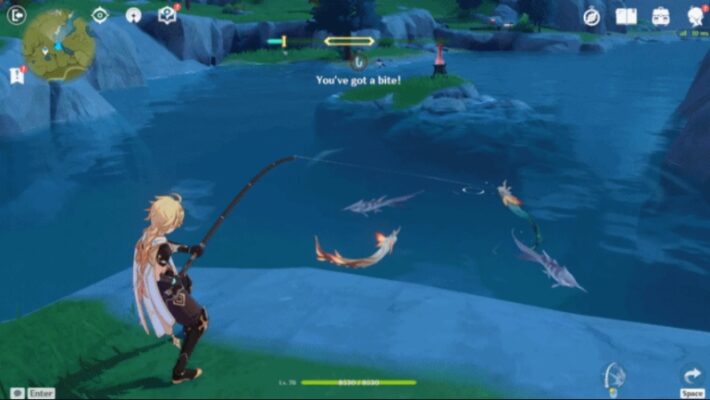 MiHoYo is working on new updates to make the world of Teyvat a more hospitable place to inhabit. As previously announced, in addition to various other updates, a fishing minigame will be added to Genshin Impact when its version 2.1 update goes live. The system was previewed on the official website.

According to the post, the Genshin Impact fishing system can be unlocked by players who acquired the Serenitea Pot and completed the quest “Exploding Population.” The fishing system will use new items and equipment, namely fishing rods of various rarities, as well as bait crafted from food ingredients.

Fishing spots will be scattered about various bodies of water all over Teyvat. Indicated by ripples, each fishing point can be accessed every three days. Different kinds of fish can be captured in each fishing spot, and the fish selection can even change based on the in-game day-night cycle. Fish are also attracted to different kinds of bait. Various vendors–members of the local Fishing Association–are located throughout each Genshin Impact region. The vendors sell various kinds of fishing gear, as well as a special 4-Star rarity polearm weapon called The Catch.

As for the fishing minigame itself, Genshin Impact players will cast their baited lures into the water and try to hook a fish. If they manage their line tension right, the fish will be successfully captured. Captured fish can be exchanged for rewards or used as cooking ingredients. The fishing system also ties into the Serenitea Pot system, as players can catch Ornamental fish out in the world and raise them in a special furnishing item called the Pool of Sapphire Grace.

Genshin Impact will gain its fishing system with the advent of its 2.1 content update, which goes live on September 1, 2021. The game itself is available on the PC, iOS devices, Android devices, PS4, and PS5.