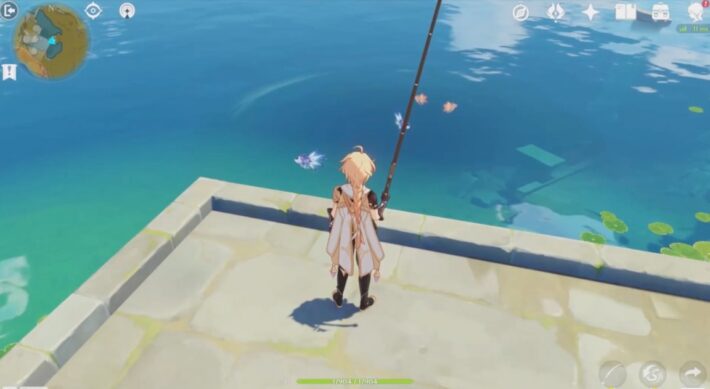 Fishing will come to Genshin Impact in its 2.1 update. While people can catch fish and crabs in-game at the moment by sneaking up on them in water or on the shore, a proper fishing system will be implemented starting September 1, 2021. This will offer new sorts of rewards for taking part, rods, and even events. The first event will even appear after the patch releases and is called Lunar Realm.

The August 20, 2021 stream went over how fishing will work in Genshin Impact. First, people will need to craft bait at a designated station. They’ll also have to have a fishing rod. Once they have both, a person could head to a designated fishing spot to begin fishing. This is a reaction-based minigame where you will have to keep an eye on the gauge and line tension to catch a fish. There will be many types. After you catch a fish, you might be able to use it in recipes or turn it in for a reward. The Fishing Associations in different areas will let you acquire new rods.

Fish can also essentially be pets. Some of the ones people will catch while fishing in Genshin Impact will be Ornamental. These can be taken to the Serenitea Pot and placed in a Pool of Sapphire Grace.

As for the Lunar Realm event, Momiji Kujirai in Inazuma will task you with fishing for the Lunar Leviathan. Rewards will include the Moonstringer rod, a Mysterious Fish Furnishing, Primogems, Mora, and Hero’s Wit.

Genshin Impact is available for the PS4, PS5, PC, and mobile devices. A Nintendo Switch version is in development. The version 2.1 update will arrive on September 1, 2021 and bring with it Aloy, Scaramouche, Sara, Kokomi, and the Raiden Shogun.