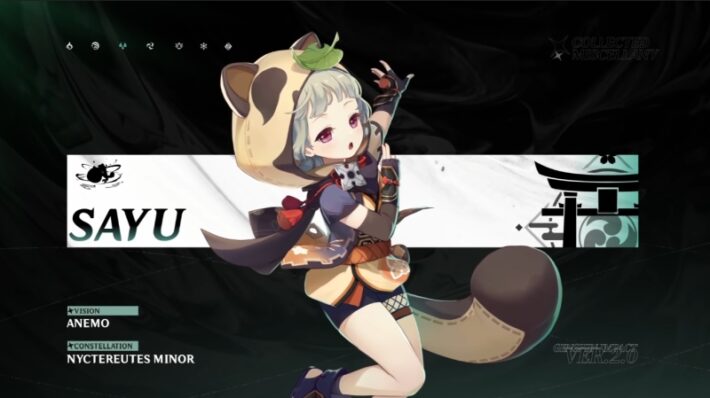 Yoimiya may be the headline character for the ongoing Genshin Impact premium Wish banner, but Sayu seems to be quite a unique presence in the game’s roster. In the latest “Collected Miscellany” trailer for Sayu, Dainsleif, via the voice of Yuri Lowenthall, details her unusual play style.

Sayu is a member of the Shuumatsuban, a group of ninjas. The Shuumatsuban operates under the aegis of Inazuma’s Yashiro Commission, which in turn is led by Kamisato Ayaka’s clan. Though ninjas have a reputation for unflinching loyalty and seriousness, Sayu is the kind of agent that prefers to work smart rather than hard. She wields a claymore and is an Anemo-element character. Her elemental type belies earlier speculation that Sayu would be the first Genshin Impact Dendro-element character.

Sayu uses her mastery of the “Yoohoo” of ninjutsu to find opportunities to slack off and avoid doing more than the minimum. Her skill at concealment and dodging unnecessary exertion is reflective in her utility passive, which prevents animals from fleeing when the party approaches. This lets players collect some of Genshin Impact‘s most slippery resources like crystalflies and lizards with ease. She also has a combat passive effect that regenerates HP for the party whenever she triggers a Swirl elemental reaction.

In combat, Sayu can use her Elemental Skill, Windwheel, a rolling attack that sheathes her in Anemo energy and sends her rolling at high speed across the landscape. Windwheel state can also absorb elemental energy on contact, allowing Sayu to spread out elemental reactions. This state can be held for quite a long time, making it useful for traveling around Genshin Impact‘s open world. That said, active duration increases its cooldown time, so judicious usage is recommended in a fight. Sayu’s Elemental Burst, Yoohoo Art: Mujina Flurry, summons the Muji-muji Daruma, a round statuette that changes its behavior based on the state of the party. If the party’s HP is high, it’ll inflict Anemo damage in the area of effect. If it’s lower than 70% (or if no enemies are nearby), it’ll heal the party.

Genshin Impact is available on the PS4, PS5, PC, and on mobile devices. A Nintendo Switch version is in development. Sayu’s banner, which is also headed by Naganohara Fireworks master Yoimiya, is ongoing until August 31, 2021.