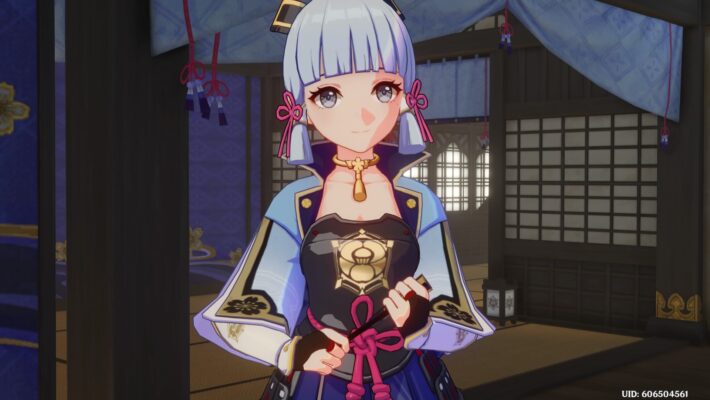 Ayaka is finally in Genshin Impact, and that’s great! We’ve known she’s on the way for a while. She appeared during betas. We had an idea of how she’d work on some level. But now she’s around and, well, a whole bunch of people who passed Adventure Rank 30, prepared set teams of characters and might possess people at level 90 could be trying to make room for her. Which isn’t uncommon. The same thing happened with people like Hu-Tao and Kazuha. But the positive thing about Ayaka is that she is a character who seems fine with being a benchwarmer while you build her up.

It all comes down to Ayaka’s nature and her moveset in Genshin Impact. For starters, she’s a Cryo-type. While these sorts of characters are fine and can hold their own as a primary character, she’s the perfect time to bring in to set up three incredible elemental reactions. For example, Ayaka can help someone like Hu-Tao or Klee out tremendously, because you can bring her in to inflict ice on enemies by either attacking or dashing, then have the Pyro-type take advantage of melt to deal more damage than usual. If you are dealing with a large number of enemies, Ayaka’s ice pairs well with Childe or Xingqiu’s water attacks to temporarily freeze opponents. And in a land where electricity runs rampant, Ayaka can quickly come in to arrange for superconduct, so enemies take damage and are more susceptible to physical attacks. 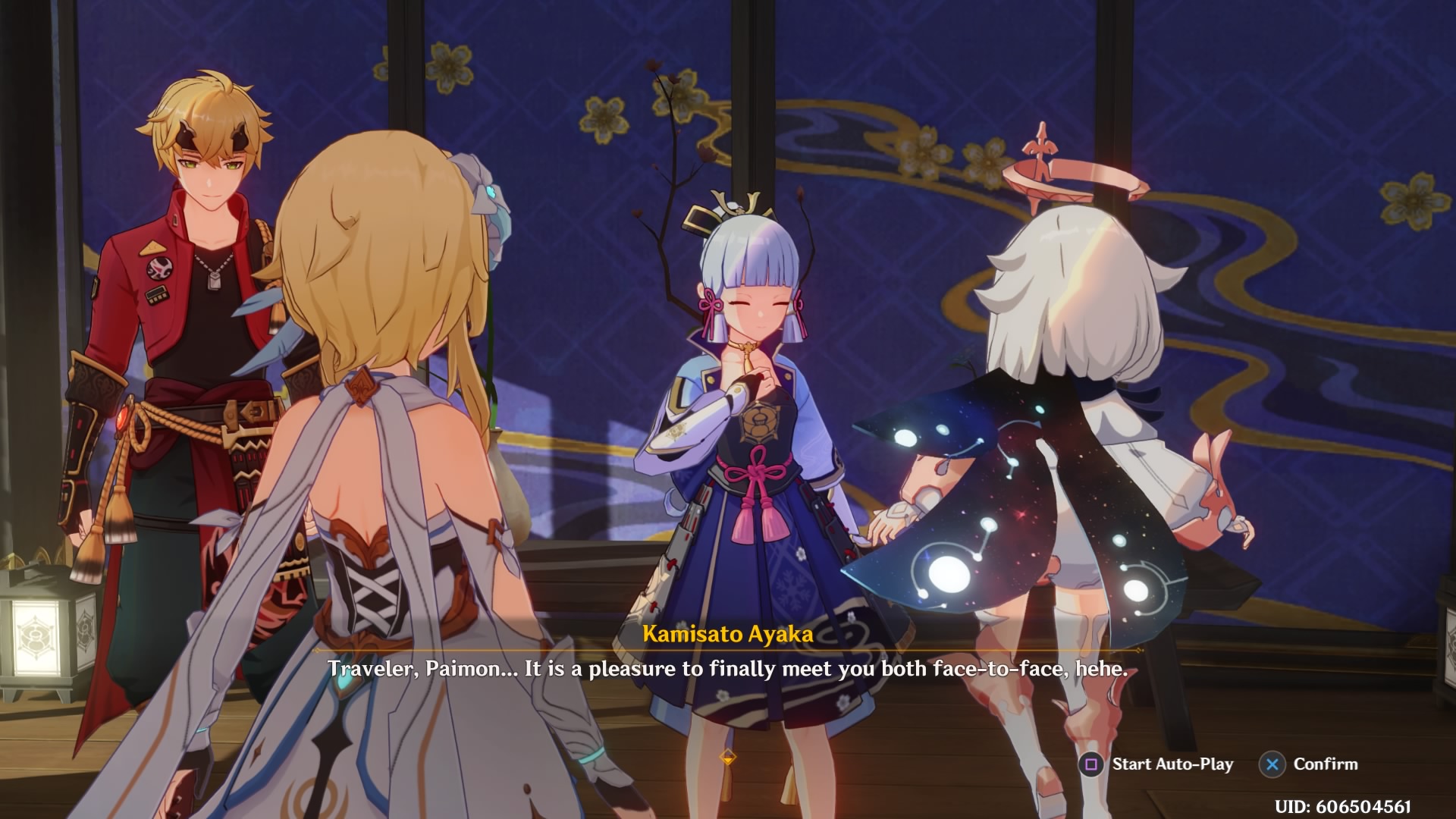 What’s also helpful is how the Ayaka moveset is conducive to quickly bringing her in for an attack, then sending her out. This isn’t someone like Klee or Xiao, where you have to have them in for the duration of their Elemental Burst. Both her Elemental Skill and Burst are the sorts where you can swap her in, let her attack and set up a reaction, then pull her back to safety. Which is critical if you’re still gathering the items needed to ascend her. Kamisato Art: Hyouka, her Elemental Skill, is a quick AOE Cryo attack that also can send some enemies flying. While I’ve been using her, I’ve liked to use this to prepare for melt or superconduct with Klee or Keqing during major battles. Or, if I’m exploring, with Childe to freeze people surrounding them and more easily pick opponents off.

Kamisato Art: Soumetsu, her Elemental Burst, can be even more helpful in the right circumstances. This is the sort of attack where you’re sending off an ice cyclone ahead of Ayaka. If you know the opponent’s patterns or are facing a group, it can be a fantastic way to set up reactions with other characters. You know the storm is going to be on the field for a brief time moving forward and dealing icy damage. You also know it will eventually explode with Cryo AOE. So in my case, while I’ve been preparing Ayaka to perhaps eventually hit level 80 and become a permanent fixture in my Genshin Impact team, she’s been fantastic for dealing with normal and weekly bosses when I gather materials and artifacts. 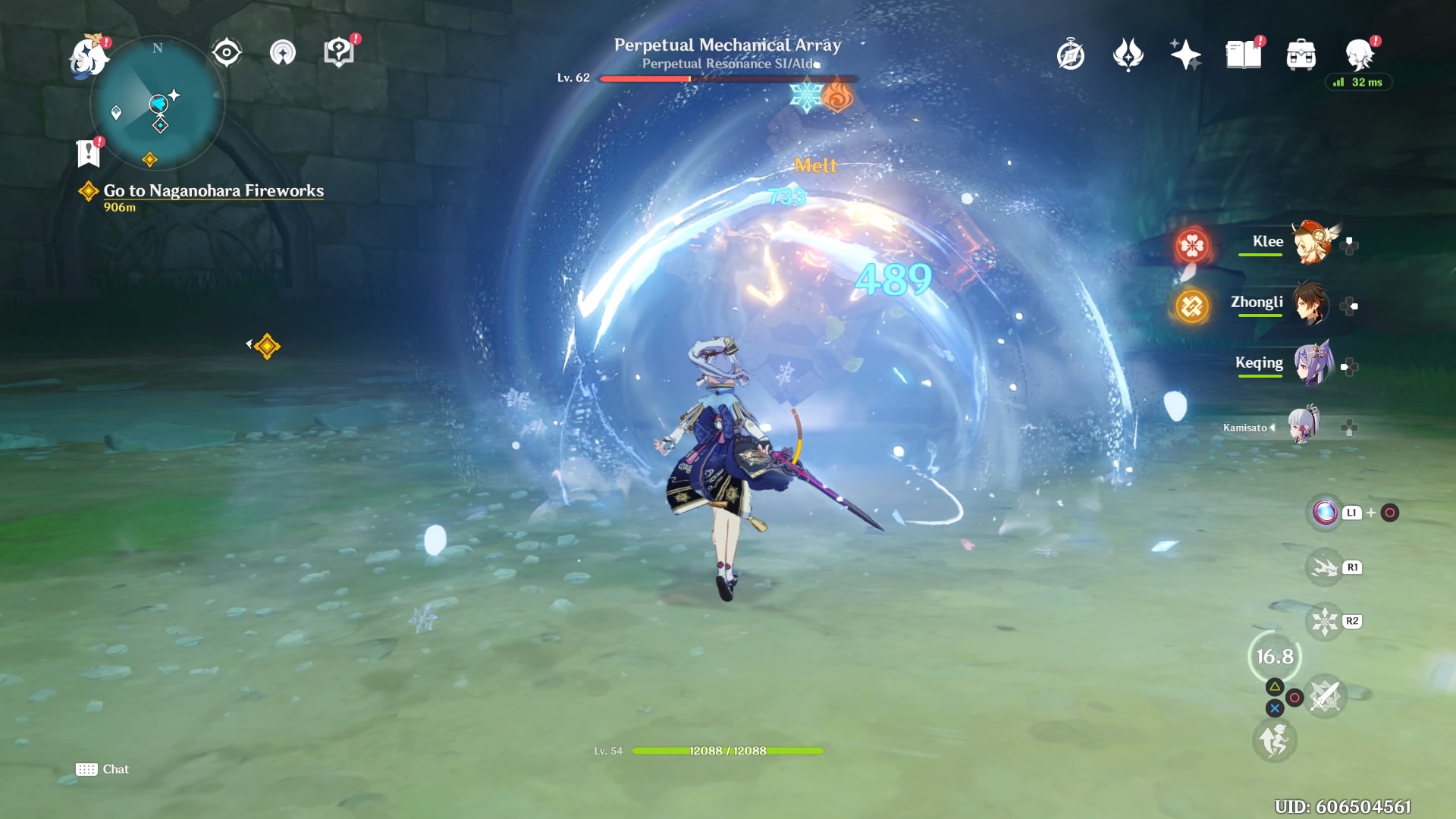 I will say that it is frustrating to have a Genshin Impact character who is good at helping in the boss fight to get her own ascension materials and then… have Ayaka unable to gather another kind of item needed to improve herself. Because that Cryo and Pyro or Cryo and Electro combination to melt to deal more damage to the Perpetual Mechanical Array or deal Cryo AOE and reduce physical resistance is great. She has no problem gathering the handguards from Nobushi or Kairagi. But then we get to the Sakura Blooms and she can’t gather her own flowers. You have to have an Electro Traveler or some other ally around to pluck them out of the air.

I guess I’m at a point where I appreciate when a new Genshin Impact character can be immediately useful like Ayaka is. When I acquired people like Hu Tao and Mona, I felt excited, but then disappointed when I realized it would be weeks before I’d be able to properly use them. With Ayaka, her element and the nature of her moveset mean you can start using her right away, even if your world’s level would normally be inhospitable to a character under level 60. There’s a versatility there, which I expect people might appreciate.

Genshin Impact is available for the PS4, PS5, PC, and mobile devices. It will also come to the Nintendo Switch. The Ayaka banner will be available in Genshin Impact until August 10, 2021.