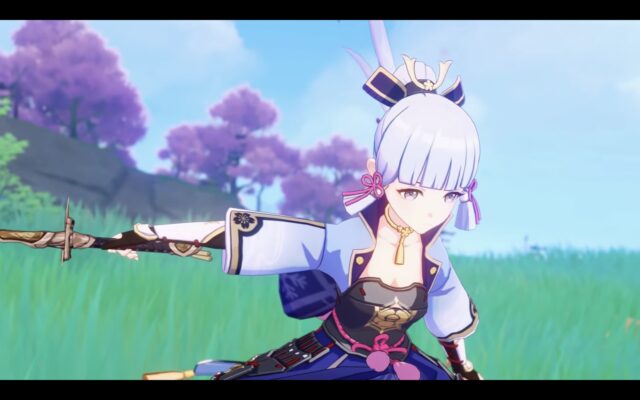 There’s a new Genshin Impact Collected Miscellany video, which means people get a closer look at the moveset for Ayaka Kamisato. Each of these special features involves Dainsleif, voiced by Yuri Lowenthal, offering a closer look at a new five-star character’s abilities. MiHoYo also confirmed the English and Japanese voice actresses for the heroine.

First, the Ayaka English voice actress is Erica Mendez. She also played Bernadetta in Fire Emblem: Three Houses, Kasane Randall in Scarlet Nexus, and Mia Karnstein in Code Vein. Saori Hayami is her Japanese voice actress, and she played Manaka in Love Plus, Ryoko in 13 Sentinels: Aegis Rim, and Shinobu in Demon Slayer.

"I have been awaiting our meeting for a long time."

Travelers, come listen to the voice of the "Frostflake Heron" #KamisatoAyaka

As a Cryo character, many of the attacks in the moveset for Ayaka involve using ice to attack. Her Elemental Skill is Kamisato Art: Hyouka and deals Cryo AOE damage. It can also send enemies flying. Her Elemental Burst is Kamisato Art: Soumetsu. This essentially summons a moving snowstorm that first does Cryo damage to any enemy it hits, then deals Cryo AOE damage to an area. She also has a unique sprint, like Hu Tao and Mona. If you use that, it kicks off Kamisato Art: Senho. She can run on water when dashing. When she reappears, she deals Cryo damage and temporarily can deal Cryo damage with normal attacks. As for her base passive, she can sometimes get extra Weapon Ascension materials when she crafts.

In some past trailers, you can see her attacks and her in Inazuma.

Genshin Impact is available for the PS4, PS5, PC, and mobile devices. The Ayaka banner will be available in-game until August 10, 2021. The game will eventually come to the Nintendo Switch.