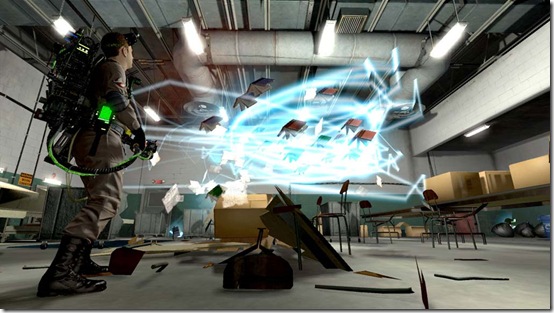 The Ghostbusters were hiring and I joined the team as a nameless rookie. My job was to trap ghosts and test equipment. Handing untested weapons to a trainee? Is Dr. Spengler serious?

You can’t make a Ghostbusters game without a proton pack and traps. The rookie has both of these plus bozon darts, which act like rockets. You don’t need to trap every ghost some… explode. Threats like candelabra spiders, flying books, and walking mounds of magma disappear after prolonged exposure to a proton beam. Larger ghosts like Slimer and deceased hobos (I’m not kidding, hobo ghosts exist in the game) need to be contained.

In the Slimer fight the rookie with help from the other (computer controlled) Ghostbusters zap the gluttonous green ghost. Once you weaken Slimer with the proton beam the slam meter pops up. You need to tire him out by yanking the proton beam in the opposite direction Slimer flies with the right analog stick and tossing him into the ground with the left trigger. Even when the slam meter fills up Slimer still doesn’t waltz into a trap. You have to drag him over the light and keep him in the trap’s range until he gets sucked in.

Busting ghosts is a lot of work and your allies are bound to get slimed. When Peter gets hit he lies on the ground like a turtle with the proton pack as his shell. He helplessly waves his arms and legs while the proton pack sparkles. You can revive him by pressing A, similar to how you would rescue a teammate in a multiplayer game of Gears of War. The CPU controlled Ghostbusters seem to get slimed a lot. In some boss fights the rookie also acted as the team medic. When you’re down and out the Ghostbusters can return the favor and revive you too. 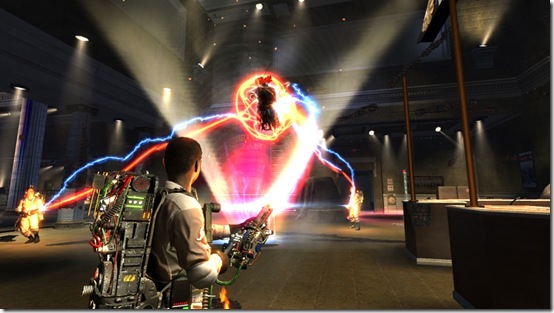 In between action scenes Ghostbusters is loaded with banter from the movie cast. Dan Aykroyd, Harold Ramis, Bill Murray, and Ernie Hudson, the original cast do the voices. Other actors like Alyssa Milano guest star. Ghostbusters might have the most Hollywood talent in a video game to date. The plot picks up where Ghostbusters II left off and expects players to remember everything that happened twenty years ago. Jokes like “don’t cross the streams” won’t make any sense if you skipped the movies. However, if you are a Ghostbusters fan this game has a lot of fan service.

You start the game in a 3D version of the Ghostbusters’ headquarters, which you’re free to explore. Did you know the Ghostbusters had Q*Bert machines? I didn’t! Little touches like that, being able to slide down the pole, and seeing a captured Slimer hovering in plastic container are fantastic. The world of Ghostbusters also has a lot of… Doritos. Ads for nacho chips are carefully positioned so you will notice them. 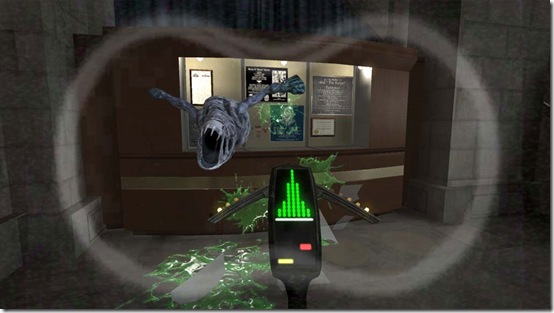 Instead of searching for Doritos ads, I should have been looking for more ghosts to trap. Most malevolent ghosts hide. The handy PKE meter can find them. This device’s blinks green when something supernatural is nearby, but you don’t have to hold it. You can get a rough idea of the PKE meter’s status just by looking at the rookie’s tool belt. When it flashes green its time to pull out the PKE meter, put on the goggles, and scan. I like how information and status bars are subtly on the rookie’s equipment instead of a floating HUD. The PKE can also scan ghosts, which provides hints on how to beat them.

So how do you beat the Stay Puft Marshmallow Man? I won’t spoil all of it, but it has something to do with hanging from a building.