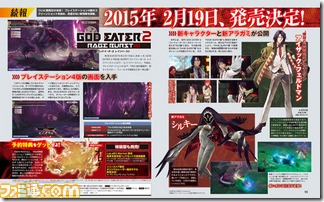 So far, we know that God Eater 2: Rage Burst will add a new scythe weapon in addition to a new “Skill Install” that lets you install skills into your God Arc. This week’s issue of Famitsu magazine tells us what else is new in the upcoming game. [Thanks, Game Jouhou]

Isaac is the man shown on the upper-left part of the image. He’s chief of Fenrir’s administration bureau of information management, and has been dispatched to the far-east headquarters as part of a task.

Silky is a new Aragami that appeared in the Spiral Tree. It floats around wearing a black cape, while using blue flames to attack from a distance and its sharp claws for close-ranged attacks.

God Eater 2: Rage Burst also adds new camp scenes added to the Survival missions that were previously available as free DLCs. This time around, while preparing for the next battle, these scenes will show the other characters taking it easy.

The game will also add a new “Personal Ability” system, that lets you freely train ally characters. When you have allies out on missions, they’ll gain Ability Points, which can be used to have them learn new abilities.

God Eater 2: Rage Burst is slated for release in Japan on February 19, 2015 for PlayStation 4 and PlayStation Vita.