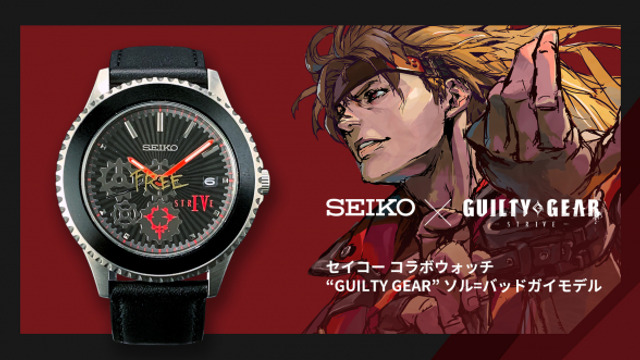 Arc System Works revealed that Seiko will produce a collaboration watch featuring the Guilty Gear protagonist Sol Badguy to help celebrate the release of Guilty Gear -Strive-. It will launch in October 2021 in Japan.

The Guilty Gear watch design will have a black and red color scheme—the latter being the image color of Sol Badguy. (Both have appeared in his outfits over the years.) It also has the “FREE” word that’s originally embellished on Sol’s belt buckle. The needles and edges can emit green light in dark places.

The watch will be made with a stainless steel case, aluminum bezel, and hard rex glass. It will have 10-Bar water resistance and its battery is expected to last for 5 years.

The watch will be made-to-order, and each watch will come with its own unique serial number on the back cover. It is currently available to order for 37,950 yen (about $364), with a bonus B2-sized tapestry of Sol Badguy drawn by Daisuke Ishiwatari, the father of Guilty Gear himself, included. The order window will be closed on March 31, 2021, and the product will be delivered around mid-October 2021.