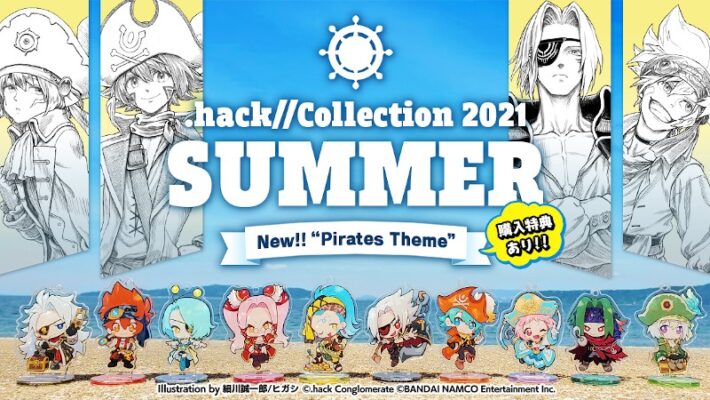 The stands feature chibi illustrations of ten characters from the franchise: Tsukasa and Sora from .hack//SIGN, Kite and Mistral from the Infection–Quarantine tetralogy, Haseo, Kuhn, and Pi from .hack//G.U., and Tokio, Klarinette, and Flügel from .hack//Link. People can get the stands by purchasing two separate sets — each priced at 3,850 yen (~$35) — or buying a single random item at 770 yen (~$7).

Meanwhile, the t-shirts feature non-chibi monochromic illustrations of the series protagonists Tsukasa, Kite, Haseo, and Tokio in their new pirate costumes. The shirts are available at 4,400 yen (~$40) in L and M sizes.

The items are immediately available for purchase on CC2 Store International. Early purchases made at the shop will come with exclusive bonus cards. The Japanese online store also accepts orders outside Japan with the WorldShopping service. CyberConnect2 will also sell the items on Amazon Japan from August 26, 2021. 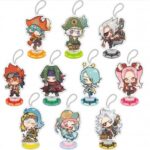 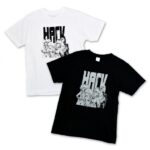 CyberConnect2 has previously released items with .hack characters wearing Easter-themed costumes in Spring 2021. The company described that the .hack//Collection series would feature themes from all four seasons. It plans to release Fall and Winter-related items as well in the near future.

The latest game release in the franchise is .hack//G.U. Last Recode, a compilation of the .hack//G.U. series available immediately on PlayStation 4 and PC. An ESRB rating indicated that the title might also come to Nintendo Switch.