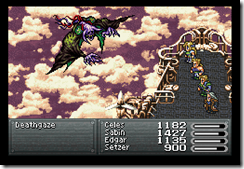 In April, Shinji Hashimoto tweeted about Final Fantasy V and Final Fantasy VI for the Nintendo DS. Neither game was announced by Square Enix, but Hashimoto said the titles had “technical problems”. That piqued my interest and I figured the Siliconera crowd was curious too. So, I asked Hashimoto about the unannounced remakes when I met him at E3.

“As you saw from Nintendo’s press conference yesterday, there is new hardware coming out,” Hashimoto replied. “We knew that was coming. We had to make decisions understanding that there were hardware changes in the near future and where want to put our resources.”

I followed up and asked Hashimoto if Square Enix has plans to bring Final Fantasy V or Final Fantasy VI to the Nintendo 3DS. Hashimoto stopped typing or maybe tweeting on his laptop, laughed, and said, “No decision has been made.”

“Rather than creating [Final Fantasy] V or VI for the current DS we want to take a look to see how 3DS does, how it evolves, and then make a decision.”