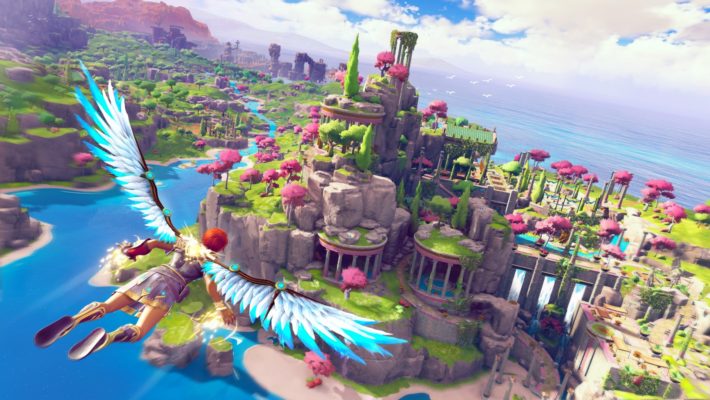 At the September 2020 Ubisoft Forward, Immortals Fenyx Rising was officially revealed and dated. Part of that involved learning that players would be on an island with spaces dedicated to the gods. Now, IGN has an exclusive Immortals Fenyx Rising Golden Isle showcase looking over what people can expect to see and do. The video has Art Director Thierry Dansereau and Game Director Scott Phillips going through each of the seven sections people will get to visit.

Every Golden Isle location is under the jurisdiction of one Grecian god. (All of whom players will help and save as Fenyx.) Hermes Clashing Rocks is a dilapidated area filled with ruined Olympian temples and the place you’ll land after your ship crashes. However, in order, the clip also looks at Aphrodite’s Valley of the Eternal Spring, Ares’ War Den, Athena’s Grove of Kleos, Hephaistos’ Forgelands, Zeus’ King’s Peak, and Typhon’s Gates of Tartaros. While this is an overview situation, people who want to avoid spoilers might want to avoid the last two or three minutes.

Immortals Fenyx Rising was previously known as Gods & Monsters while in development. It will come to the Nintendo Switch, PlayStation 4, PlayStation 5, Xbox One, Xbox Series X, PC, and Stadia on December 3, 2020.