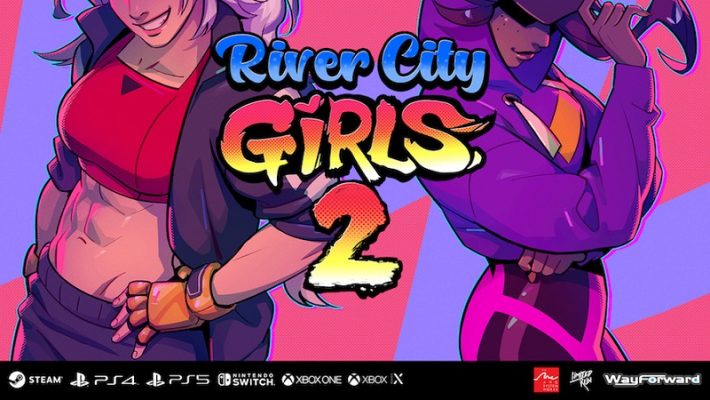 WayForward recently announced not one, but two new games in the River City Girls universe: River City Girls 0 and River City Girls 2. Siliconera spoke with Director Bannon Rudis and Adam Tierney, Head of Bizdev and Publishing at WayForward, to learn more about how they’re building on the series’ universe with new fighters and locations, what we can expect from these new playable characters, and what other characters from the Kunio-kun series may be showing up to fight with you (or against you).

Joel Couture, Siliconera: What sorts of new things can players expect from this new venture out into the world of River City Girls?

Bannon Rudis, WayForward: We are returning to River City, but much has changed. We have new characters, new enemies, new locations, and more nonlinearity so players can choose how they play the game. I actively watch River City Girls streams on Twitch and watch how players are actually playing the game without guidance. I use these streams as my own personal feedback about what did and didn’t work as well as I hoped for in the first one. Then I take that feedback and rework it for the sequel to make it an even better game.

What new elements did you want to bring to this sequel?

Tierney: We were very pleased with how River City Girls wrapped up, and reception to the game has been great. Bannon mentioned Twitch streams, and I will say it’s incredible to have a game where nearly two years after its release we still see people playing it on Twitch every single day. However, since we were using an all-new art style, animations, and systems in River City Girls (compared to previous Kunio-kun games), it was an immense amount of work to get everything done in time. So more than anything, River City Girls 2 allows us to catch our breath, so to speak, and refine everything from the first game while adding a handful of new features. Online multiplayer, for example, was something we really wanted in the first game but just wasn’t possible because there was too much to tackle. The same with the story and VO elements in the original, which remained Misako and Kyoko even if you were playing as Kunio or Riki. With the sequel, VO and story will be more dynamic to who you’re actually playing as.

Can you tell us anything about the two mysterious characters that feature in the River City Girls 2 artwork we’ve seen so far? Anything about who they are or how they fight?

Rudis: They are incredibly mysterious, aren’t they? As you can see, the character on the left has really been working on her core strength, and she brings some boxing and wrestling moves to the fight. She won’t go down with just a cheap shot to the stomach from some street thugs. The character on the right, on the other hand, you might call an underground fighter. She has some really flashy moves and can chain her attacks into long combos while looking super stylish. And while we do have two new characters to play as, we also wanted to make sure the original characters felt refined as well, so we went back and tweaked them with some new moves and attacks. 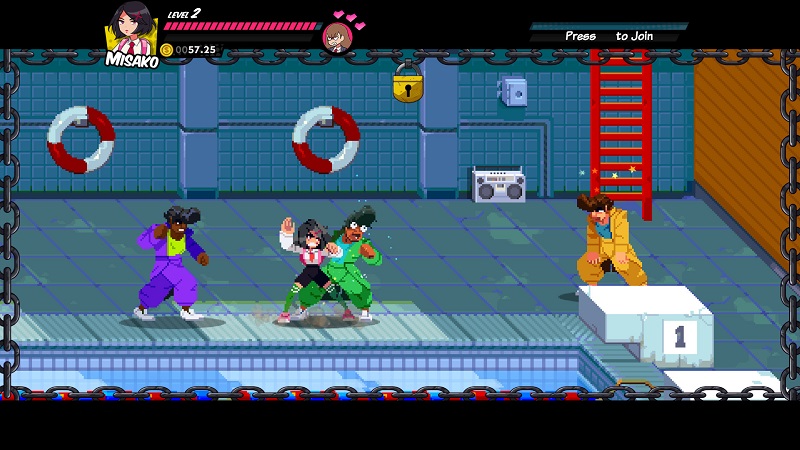 What challenges do you face in making a compelling beat ‘em up? What thoughts do you feel go into giving a solid entry in the genre a spark that makes it special? How will you channel this into River City Girls 2?

Rudis: I think the thing that makes the River City/Kunio-kun series in general different from other beat-’em-ups is the fact that there is a lot more freedom. You can navigate in any direction, you can play at your own pace, and upgrade your player in whatever style fits you the best. We wanted to expand on that even further. Especially by really making the world feel lived in and alive. Plenty of places to explore and discover.

Tierney: With the sequel, to put it simply, we’re expanding the world. That was one of the big appeals about diving into this series for us — we knew the first game would be a heavy lift, but then everything we created (minus things like story and boss battles) could carry over into any sequels, getting bigger and bigger with each game. River City Girls 2 has all the same locations and characters, plus a ton more, so it’s an ever-expanding version of the Kunio-kun world.

What thoughts go into creating a fighting style for each character? In giving them a personality through the way they beat people up?

Rudis: Each fighting style should feel different enough from each other but not so foreign that a player wouldn’t be able to understand a new character right away. Even though some of their moves function similarly for ease of use, it’s the fact that their personalities shine through their animations that make them feel so unique from each other. I have a basic idea of what I want each of them to be, then I work with my main animator Kay on their animations. He and I throw ideas back and forth, and from there the characters naturally evolve into their final forms.

A sense of impact is a vital part of any beat ‘em up’s combat. What details go into creating that sense of crushing punches and kicks in River City Girls 2?

Rudis: It’s a deadly cocktail of hit stop, just the right amount of screen shake, big loud VFX, crunchy sound effects, and the animations themselves. The smears and blurs we add to skip frames really make moves have a lot of weight and power behind them. 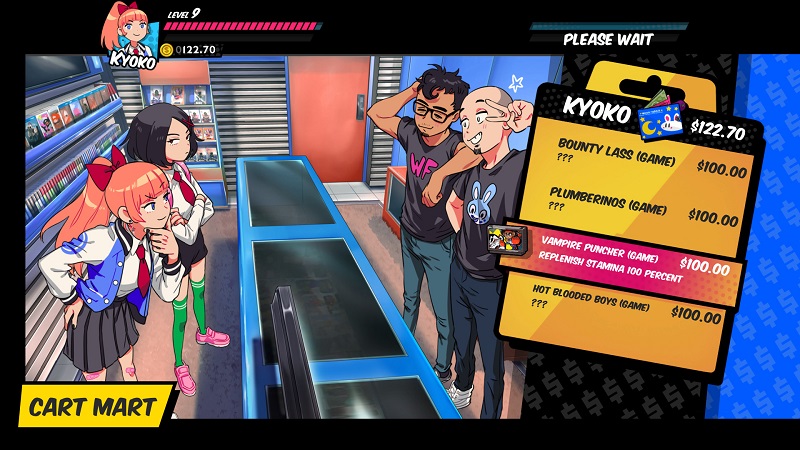 Likewise, the music is a key element of any solid beat ‘em up. What ideas go into drawing out just the right kind of musical backbone to fuel the action for this game?

Tierney: With the first River City Girls game, even before we met series composer Megan McDuffee, we knew we wanted music that felt like players would be “fighting to the beat” throughout the adventure. Megan did that beautifully in the first game, with her unmistakable ’80s-style retro synthpop. What we didn’t expect when starting was just how much vocals would be a part of the music. One of my favorite music tracks ever in games is “Palm Tree Paradise” from Wario Land 4, specifically because you’re just playing through a stage and suddenly you hear a full vocal track (in a GBA game!). Typically vocal tracks are reserved for title sequences, end credits, etc. And there was just something so magical about low-key dropping a full vocal song into a game like that. So when Megan offered to do some vocal songs on the first River City Girls game, we were blown away and decided to pepper those throughout the worlds and stages to give players that same kind of surprise reaction I had with Wario Land 4. And I think Megan’s music for River City Girls has only gotten stronger with River City Girls Zero and River City Girls 2, as incredible as the first game’s soundtrack was.

River City Girls 2 is born from an extensive history through the Kunio-kun and Double Dragon games, and the original River City Girls featured some fun cameos. Will we be seeing any more nods to the past games that you can hint at?

Rudis: We have covered a lot of ground in the long line of classic Technos games, but another company has lent their characters to us in a fantastic way. And maybe even a WayForward character or two might show up. Who knows?

Tierney: Again, we don’t want to give too much away about the plot just yet since the game isn’t out until early next year (2022). But speaking broadly, River City Girls 2’s story is a consequence of the events of River City Girls, and to a degree River City Girls Zero as well (even though that’s a much older game). We wanted the game to build on the story, characters, and world we established in the first game in a surprising and unexpected way. In some ways, the core of River City Girls 2 is darker than the first game, but I also think the lighter and goofier elements are even more so this time. At the end of the day, though, it’s really all about what Bannon, I, and the rest of the team think would be cool and fun, and that’s what drives most of the content decisions in the game. 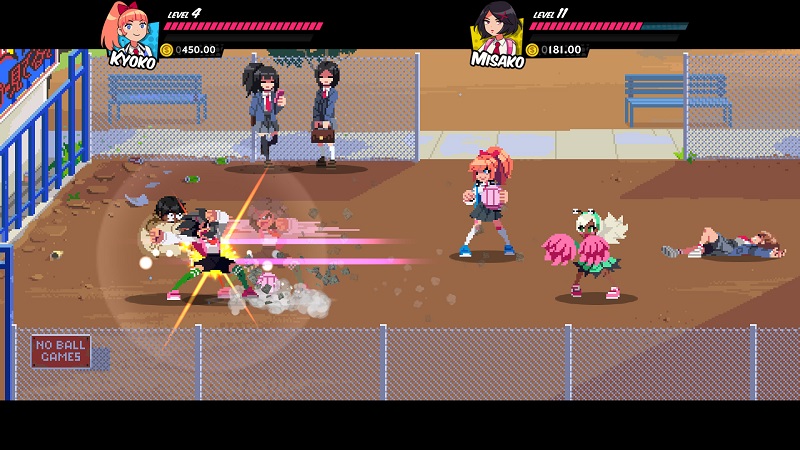 What led to the acquisition of River City Girls Zero?

Tierney: More than any other game, Shin Nekketsu Kōha: Kunio-tachi no Banka, a Japanese Super Famicom game in the Kunio-kun series, was what inspired River City Girls into existence. That was the previous game to feature playable Misako and Kyoko, in addition to series mainstays Kunio and Riki. So River City Girls was sort of our homage and update to that game. In fact, we even break the fourth wall to mention it in River City Girls’s final secret battle.

It occurred to us after River City Girls was released, though, that most people playing our game will have never experienced that title, since it was never released in the USA. Since our partners at Arc System Works own the game, we thought about porting it to North America and Europe, and then that idea became, “Well, what if we added some River City Girls extra features as well?” The end result will be a very pure experience of the original game (the only major adjustment during gameplay is localization to new languages), but dressed in a little bit of River City Girls personality, which includes a new anime intro sequence, a new Megan McDuffee title vocal track, and two “motion comic” manga sequences (like in River City Girls) that play before and after the game to tie it into our River City Girls universe. Those sequences have full VO, which means we get to bring Kayli Mills and Kira Buckland back. We also have 16:9 border art (since the original game was 4:3).

We’re informally calling this game a “Port Plus,” since it’s a pretty faithful port of the original game, but it’s also got those new elements around it. If people dig the way River City Girls Zero comes out, we might take this approach to other retro games we love.

How will the localization of it be handled? Will it pull from the new River City Girls lore in parts or be true to the original?

Tierney: We’re still working on it, but the current plan is to start with a direct translation of the original Japanese script into all other languages. Then (as writer of the River City Girls games) I’ll take the English text and tweak it slightly so that Misako, Kyoko, and the other characters speak in a style similar to how they do in River City Girls 1 and 2. But it’s going to be a fine line to walk because we don’t want to change the meaning of the original dialogue and plot, just the flavor of it. We’ll see how it goes — if it’s an impossible task, maybe we’ll end up splitting it into two English versions: one entirely faithful and one more River City Girls-flavored. We want to be as respectful as possible to the original game, especially since it’s officially coming to North America in English for the first time, but we also want to satisfy River City Girls fans picking it up.

Which platform ended up being the most popular for the original River City Girls?

Rudis: We can’t go into specific numbers, but the game seemed to really resonate with the Switch audience.

Rudis: The additional nonlinearity. It just wasn’t feasible in the first game, but it’s encouraged in this sequel. Plus, I mean, come on… online multiplayer. That’s the big one. Gotta appease the people.