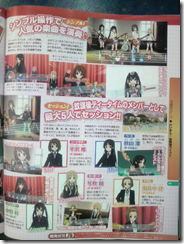 Sega, following up on the success of Hatsune Miku: Project Diva, has another niche music/rhythm game planned for PSP and this one is based on the anime series K-On!

K-On After School Live is scheduled for release in Japan this fall.