In the boonies of Ragpick Village live Chris and Jurio, two childhood friends who set out on a pilgrimage throughout the land of Tiraswell. On their journey they searched for shrines with magic mirrors, which contain omens of the future. Like the first Legend of Heroes game, Prophecy of Moonlight Witch is a stereotypical RPG for the PSP. If you’re into turn based fighting, lots of exploration and a hero who turns from a boy to a man then Legend of the Heroes II is a game for you. 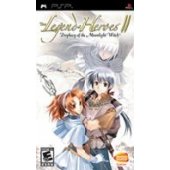 The land of Tiraswell is like any other fantasy RPG world. There are towns to shop in, forests to explore and caves filled with monsters. Instead of having random enemy encounters Legend of the Heroes II places all monsters on the world map. Above each monster is a color coded emoticon that shows the relative strength of the monster compared to the party. Weak enemies try to escape the party and stronger enemies aggressively chase the journeying pilgrims. While the system is handy for avoiding weak fights, Chris and Jurio still have to fight. If you continue to avoid fights you’ll either get trashed by a boss or by fights in a later dungeon.

Combat in the game is standard turn based fighting. First you choose all of your party’s actions such as attacking with their weapon, casting spells or using skills. Once the commands are set players sit back and watch their actions play out. To add some strategy to battles in Prophecy of the Moonlight Witch each attack has a set range where it is effective. If a monster is outside the range the attack will fail and all your character does is move closer to their target. While the idea is good, the execution is more frustrating than entertaining. In some fights (including the early ones) monsters will be positioned in a way where they are in your melee attack radius for only one hit. After one attack the monster gets knocked back and becomes too far to strike for a second hit. To end battles quickly players can use finishing moves once their power gauge is full. Finishing moves can be used right when the power gauge maxes out or they can be saved for a boss battle. Finally, there are summons (aka spirit magic) that Jurio can use which drain a lot of MP, but also cause a lot of damage. The whole system is basic with the exception of the party’s pet. If you feed your pet and treat it well it might jump in a fight with a mega attack.

Fights progress fairly quickly, but the overall pace of the game does not. Legend of the Heroes II has lots of walking around, hours and hours of walking around and exploring the eight different kingdoms. Although you aren’t free to roam around. The game frequently locks players into going to different areas to do mundane tasks. The worse of it is at the beginning where you’re riding a ship to Raguna. Chris and Jurio are stuck on the ship and are forced to do chores. As Jurio the player has to walk into all of the rooms to clean them. After that you have to talk to the passengers to track down a thief. The process takes about half an hour with an uneventful conclusion. Things do get a little more interesting with Lodi’s obsession with a sea serpent and the mystery behind old man Lap. Although, most people wont sit through the game that long to get to the semi-decent parts of the story. On the bright side Legend of Heroes II has “importance icons” to show who you need to speak to.

The way the game is presented is just as bland as the gameplay. There are basic graphics that look crisp, but have the seen it before feeling throughout the game. Even the battle effects are kind of boring. Since the characters are so tiny on the screen you can barely make out what is going on. Inherently there is nothing “wrong” with Legend of the Heroes II: Prophecy of the Moonlight Witch. It has all of the elements necessary to make an RPG, but it is dearly missing originality.

Since the game is localized, Legend of the Heroes II is completely in English.

Namco Bandai Games released this in the USA as part of the Legend of the Heroes series.

+ Pros: Decent graphics and the skeleton of an RPG.

– Cons: A bland story and a lack of freedom from it.

Overall: Legend of the Heroes II: Prophecy of the Moonlight Witch has everything an RPG fan would want in an RPG, but at the same time the whole experience is rather generic.