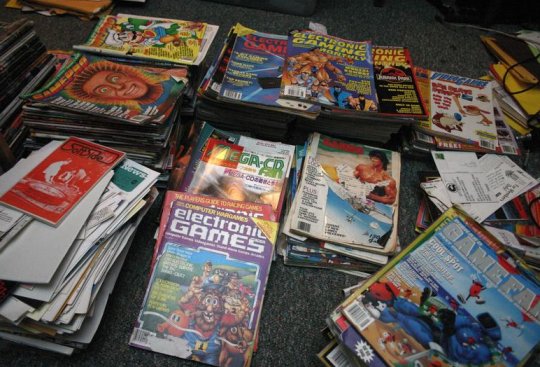 The PDF magazine, or to be more precise the freeware video gaming PDF magazine, is an interesting and contradictory medium. It thrives in the so-called Web 2.0 highly interactive user-based environment, while avoiding to offer its audience any direct means of influencing (or even commenting on) its content. It also functions very much like a proper magazine in an era when printed periodicals seem to be under a lot of financial pressure and when users are addicted to their daily (as opposed to -say- bimonthly) dose of gaming, news, previews, freebies, whatever. It’s free and produced as a communal effort when most things are valued on a monetary basis.

So, what is it that makes PDF mags so popular? Why do people create them? Why do gamers actually download and read them? Why aren’t there any pr0n related ones? Why in general?

Well, Siliconera won’t provide you with the answers. We’re just giving you food for thought and an appropriately Web 2.0 comments system to express it (the thought not the food). What we will provide you with though, is a list of the best gaming e-publications we could come up with. Without further ado then, here’s the list -in alphabetical order- you’ve all been waiting for (or not, regardless):

2o2p Magazine. A PDF mag released every other month by the infamous 2 old 2 play crew, who are apparently targeting the older than 25 group in a cunning plan to remind us of our cholesterol problems. Reviews on a variety of platforms, opinionated editorials, some lovely cynicism and retro gaming content are thus to be expected.

Adventure Lantern. The only adventure gaming centered ezine around, is a bi-monthly publication featuring news, reviews, some previews, interviews and -interestingly- walkthroughs of new and not so new adventure games. Obviously the platform of choice is the PC, with the Nintendo DS slowly creeping in, even though diversions both in format and in genre are to be expected.

Gamerzines. Not a PDF magazine, but a bleeding PDF magazine lair. Gamerzines offers 5 professionally created ezines covering the PC, the Xbox 360, the PS3, them contemporary Nintendo and Sony handhelds, and -rather shockingly- the excellent PES footie game. Just make sure you got the latest Acrobat Reader installed for these beasts feature tons of embedded video.

Game Tunnel Magazine. An effort by indygaming website Game Tunnel, surprisingly focusing on PC indy releases, that doesn’t seem to have made it past the first issue. Either that or my browsing abilities aren’t enough to actually track & ruthlessly download issue 2.

Old Skool Games. Obviously retro and erratically published, yet brilliantly written and an absolutely necessary download for every one still fond of the 8-bit era. Oh, and spread the word, OSG are looking for more contributors.

The Art of Gaming. Three issues so far, all of them focusing on the visual arts side of gaming, all of them refreshing. By now Mario, Metal Slug and Warcraft have been covered.

The Gamers Quarter. Easily the more impressive mag ever brought to the PDF arena and the only one also being made available as a proper printed magazine (for a price, that is). The Gamers Quarter is a quarterly publications with some excellent writing, covering anything a gamer could think of but couldn’t write about. Huge variety, impressive layout, good humor, everything. Better get downloading, then.