Lumines was the reason I got my PSP. Q Entertainment’s stylish music X puzzle game was as innovative as it was addictive. When Buena Vista Games announced they were releasing Lumines II, I was a little skeptical. What more can BVG add to the Lumines formula? Apparently not much. While Lumines II is a really a tweaked version of Lumines I didn’t like it any less than the original. Also I’m betting that some people are going to enjoy playing the sequel even more than the PSP game or the Xbox Live release. 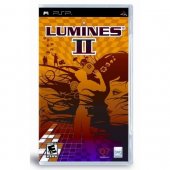 Unlike the techno heavy original, Lumines II has a more diverse selection of music. You’re going to hear pop songs like “Hollaback Girl” mixed right after original house songs designed for the game. While there are originals tracks, Lumines II has a lot of licensed music. Some songs fit right in like Junkie XL’s “Breezer” and “Star Guitar” from the Chemical Brothers. Other songs like “Pump it” from the Black Eyed Peas don’t have the same blended feel as the other songs. When you clear pieces in Lumines sounds play that complement the music, but this doesn’t work out with the Black Eyed Peas song. Instead the tones are muted by the song’s volume. The licensed songs have another benefit, background music videos. You’re probably not going to be spending too much time watching the video since you’re focus is on the falling blocks. But they are a cool addition that make Lumines II’s skins look slicker than the first game.

Besides the streaming videos, backgrounds for the other songs in Lumines II have gotten an aesthetic upgrade too. The first song in “class A” challenge mode has rock rifts and clear blasts of fire in the background. Speaking of the “other” songs, you might have seen some of them if you played the original Lumines. “Just” returns from the first game and other songs like “Circles” made their debut in Lumines Live. This might bother fans that shelled out dough before on Q Entertainment’s flagship puzzle game. On the other hand there are still a decent amount of songs that are currently exclusive to Lumines II. There are sixty skins in all and that includes all 24 skins in Lumines Live. That leaves 36 skins only in Lumines II, but if expansion packs keep coming out for Lumines Live they might not be exclusive forever.

Lumines II also has a few new modes. Challenge mode is now broken into three separate classes B (beginner), A and S (advanced). The difference between the classes seems nearly non existent since the blocks come up at random. The major difference is the tempo of songs you play. Class B has a slower tempo so you have more time to set up blocks to clear, while class S starts off faster. Each class has different songs in the loop and the only way to unlock everything is by complete all three classes. Beating all three classes unlocks another mode, enduro which loops all of the skins in the game. Lumines II also has all of the missions originally shown in Lumines Live. Mission mode has puzzles where you have to figure out how to clear all of the blocks on screen with a limited number of pieces or under a certain amount of time. Other gameplay modes include the Vs. CPU mode, Time Attack and puzzle mode. All of them are complete, but the puzzle mode reused most of the puzzles as the first game. Probably the most interesting tool is the sequencer where you can remix a song out of four beat patterns. The interface of the sequencer is confusing and the instruction manual doesn’t explain how to use the sequencer very well. What you can do is choose where to place sounds. It is more like an on or off choice versus a full MIDI synthesizer. The other major improvement is that Lumines II brings in the skin edit mode where you can select skins you unlocked to play in a loop you create.

Lumines II doesn’t deviate from the Lumines formula at all. It’s still the same techno two colored block dropping game that clears pieces by the tempo of the song. You can still use the same techniques (i.e. snaking!) you mastered in Lumines to chain pieces and special blocks that can clear all of blocks of the same color are once again a godsend. Most importantly, Lumines II is still fun. I thought by now I would have burnt myself out on the series after playing so much Lumines and Lumines Live. However, the clever style and mix of new songs brought me right back into the Lumines groove. If you haven’t played any version of Lumines, Lumines II is the one to get. It has a great blend of music, all of the gameplay modes and no microtransactions to stop you from enjoying it. Fans of the series who skipped Lumines Live should give Lumines II a try too, since most of what is in Lumines II will be brand new to them.