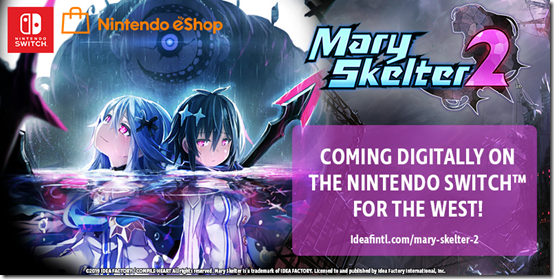 Idea Factory International just announced that Mary Skelter 2 is coming over Westwards digitally via the Nintendo Switch eShop, although no release date was given. The game was announced to be coming to the Switch in Japan as well back in March, but has not been released yet either.

According to IF International, the game will come complete with the features present in the Japanese version, including the full Mary Skelter: Nightmares which has been remade using the systems and balancing from the second game. The game will feature English and Japanese dual audio, as well as English subtitles.

Here’s an introduction to the game via Idea Factory International:

Mary Skelter 2 evolves the core elements in Mary Skelter: Nightmares to bring to you a world teeming with twists and turns, topped with a new battle feature where the previous protagonist, Jack, is now a Nightmare. Players can use his Nightmare powers to defeat enemies, but at a maddening cost. Set in an alternate reality that includes familiar characters from the first installment, players must relive the torturous dungeon experiences and find ways to feed an almost insatiable prison. Will you be able to escape this prison and find sanctuary or will you fall into the clutches of madness?

The official website for Mary Skelter 2 is now available here.

Mary Skelter 2 is available on PlayStation 4 in Japan, and is coming to the Nintendo Switch eShop in both the West and Japan with no release window.