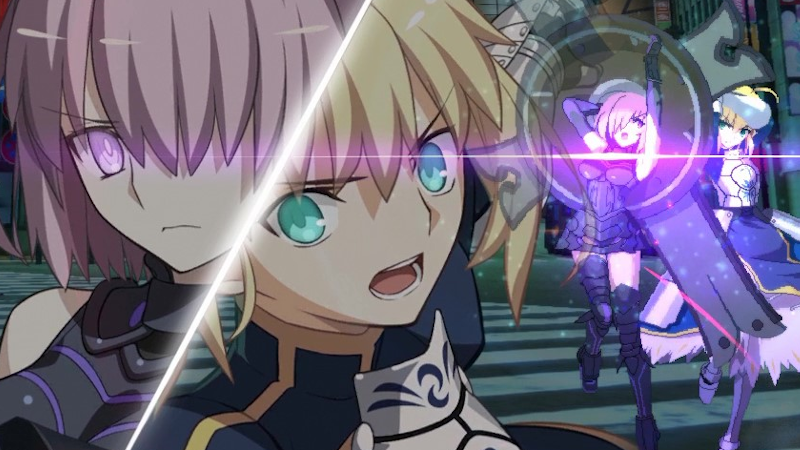 Saber will no longer be the only Fate series character to appear in Melty Blood: Type Lumina, as Mash Kyrielight will soon join her in the game’s roster. Following the coverage for Neco-Arc the previous day, Type-Moon and French Bread have released another press release detailing the Fate/Grand Order heroine’s inclusion through the imminent Summer update patch. [Thanks, 4Gamer!]

True to her Shielder Servant class in Fate/Grand Order, Mash will excel at defense in this fighting game. Some of her moves will let her ready her shield to charge forward or parry her opponent’s attack.

The Type-Moon Games YouTube channel has two new Melty Blood gameplay videos featuring fights between Mash Kyrielight and Saber. The Japanese and English versions are uploaded separately. You can watch the bouts between the Fate series characters with English interface and subtitles right below.

Mash Kyrielight will be the second character from the Fate series to appear in Melty Blood: Type Lumina. Type-Moon announced the addition of Saber to the launch roster on September 29, 2021, which was the day before it released the fighting game.

Melty Blood: Type Lumina is available on PlayStation 4, Nintendo Switch, Xbox One, and PC. The Summer update that adds Mash Kyrielight and Neco-Arc as new playable characters will appear on August 19, 2022, at 6 AM UTC (2 AM ET).