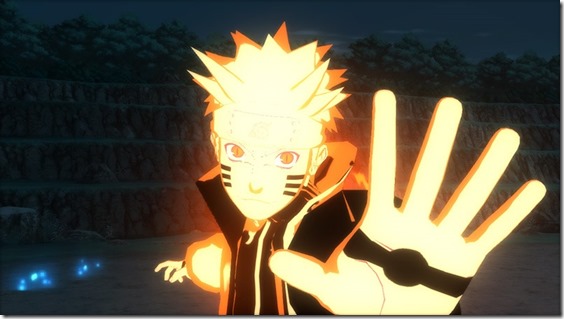 When you’re walking around a Bandai Namco Games showcase and you a see a guy dressed as Sage-mode Naruto, it’s probably Hiroshi Matsuyama, CEO of CyberConnect2, the developers responsible for the Naruto: Ultimate Ninja Storm series. Siliconera recently had a chance to catch up with Matsuyama once again to talk about Naruto Shippuden: Ultimate Ninja Storm Revolution.

Do you have a favorite characters in the series?

Hiroshi Matsuyama, CEO, CyberConnect2: I’ve been with the series for over ten years, so it’s changed over time. At first, it was Shikamaru, then Uchiha Itachi—but now, it’s without a doubt Uchiha Obito.

How do you decide what kinds of moves to give the different Ninjas in the game? There’s a lot of source material to draw from. Do you ever take some liberties?

Each character has unique abilities in the series, but the series is long, and the characters are always picking up new techniques or styles. So, in the game, we keep up with how the story has developed and make sure to include everyone’s latest abilities. We always have to think about keeping it consistent, stylish, and cool. 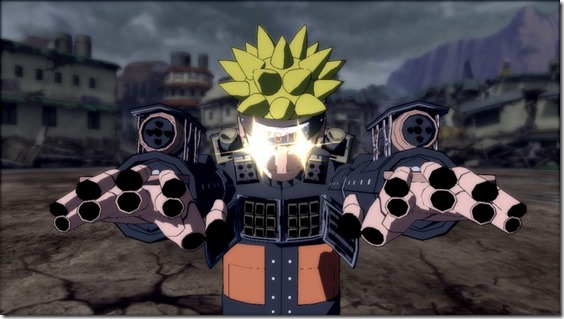 Mecha-Naruto was one of my favorite playable characters in the demo. Is he an original character from CyberConnect2? How did he make it into the game?

So, Naruto Shipuden: Ultimate Ninja Storm Revolution has the most playable characters in the entire series—over 100, in fact, and that’s not including support characters. Within that, we have an additional mode, called Ninja World Tournament, which is exclusive for the singleplayer mode.

So, in the Ninja War mode and of course the Ninja War Tournament Mode, we asked for a new character from [Naruto author] Kishimoto-sensei, and of course, when we asked, he said, “You know, if we make an original character in the ordinary style, that’s kind of boring; we need to make a character that’ll have impact so that everyone in the world will be surprised by it.” So… Kishimoto-sensei came up with the design for this character, which was quite a surprise for us, too!

In Ultimate Ninja Storm 3, because we stopped at the Great Ninja War, at that time, then, we exceeded the story of the animation and were keeping up instead with the original manga. So in Revolution, our story will span the Naruto world up until the final anime episode. In addition to that, we’ve included a new game mode, so we tried to go a bit beyond the story and give a new “ninja” experience to the players. 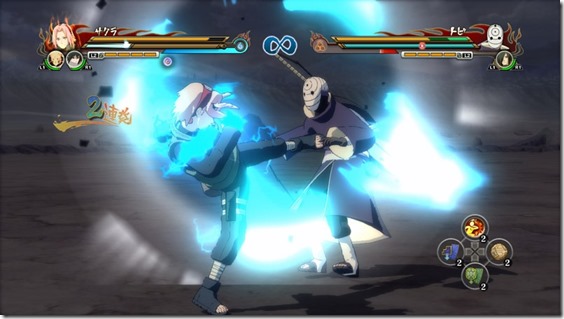 What kinds of new experiences can people expect in this iteration of Ninja Storm?

In the Ninja World tournament, even though this is a single player mode, the player can battle against three other Ninjas in one place, at the same time. This all-out-brawl mode is new to the series. In addition to playing through this Ninja World Tournament, you can also find sub-quests on your journey through the main quest mode. By just playing through the story, you’ll log about 20 hours of gameplay—but to do the World Tournament and sub quests, you can log up to 30 or 40 hours.

We also have another new mode that’s called Ninja Escapade. This mode includes three episodes which are exclusive to Revolution. Right now, I can only talk about two of the three episodes: one of them is called “The Creation of Akatsuki,” which is based on the Naruto world and, of course, written by Kishimoto-sensei. The second is “The Two Uchiha,” which is the story of Uchiha Shisui and his best friend Uchiha Itachi. It explores the history of their relationship. Those two exclusive stories, with animations, will be implemented in the game.

Uchiha Shisui’s costume and also his character’s design, as well as the costumes of Akatsuki members prior to their characteristic red-cloud robe, are designed by Kishimoto-sensei. So we have two animation episodes we can tell you about now—but we have another one in preparation that we’re keeping up our sleeve. Please look forward to it!

[Note: The third could possibly be the episode about Naruto’s mom.]

It sounds like you work closely with Kishimoto-sensei. Do you guys still maintain some creative freedom with these games or do your decision have to filter through him?

CybeConnect2 proposes episode ideas to Kishimoto-sensei, so while we do come up with our own ideas, he gets to approve on them and help us expand them. 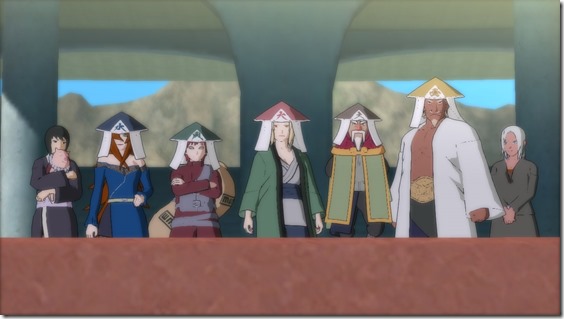 The Naruto anime and manga is a pretty big hit in the Americas, but historically, how have the Ultimate Ninja Storm games done?

The Ultimate Ninja Storm series has sold more than 12 million units worldwide. It’s really interesting to see that, with each release, there are new users coming into the series. For example, with Storm 3, we sold 1.8 million units, the most in the entire series. So we can say that more people are coming with each iteration.

The people who have watched the anime or read the manga before and left the series might come back to the game, play it, and have it reinvigorate their interest in Naruto. It’s a great circulation between anime, manga, and game.

Are there any other technologies you’d like to see the Storm series on? Do you have a target audience in mind when you release the games?

In this iteration, we’re supporting the PlayStation 3, Xbox 360, and Steam. We also like to target all of the casual players who aren’t playing games that much, or watching the anime or manga that much—we want to attract as wide an audience as possible with this game. This includes the hardcore fighting game fans, too! We have refined battle system for this game for that reason, and we’ve also included several foreign-language subtitles to make it globally accessible.

Of course! In the battle system called “ultimate jutsu type,” you can make a combo ultimate jutsu, which combines three characters’ Ultimate Jutsu together. One of them—Naruto, Sasuke, and Sakura’s—will summon their giant characters and do a huge combo attack on your enemy. Also, if you select Awakening type, we have a mode called “true awakening,” which you can activate and transform into one of these gigantic characters to take advantage of your characters.

In terms of characters, is there any benefit of using one character throughout the entire game, or are you encouraged to switch it up throughout the story and tournament?

Character-wise, when you play through the World Tournament mode, you can unlock more characters. We like to ask all the players to play through this mode to unlock as many characters as possible. Also, each character has a strong-point or weak point, but when you select a character you can select one of three battle types: Ultimate Jutsu Type, Awakening Type, or Drive type.

Each have different strengths and weaknesses. Players can select a character, and then a type, and essentially create their own fighting style and strategy. This new battle system creates a variation that lends itself to an equal playing field.