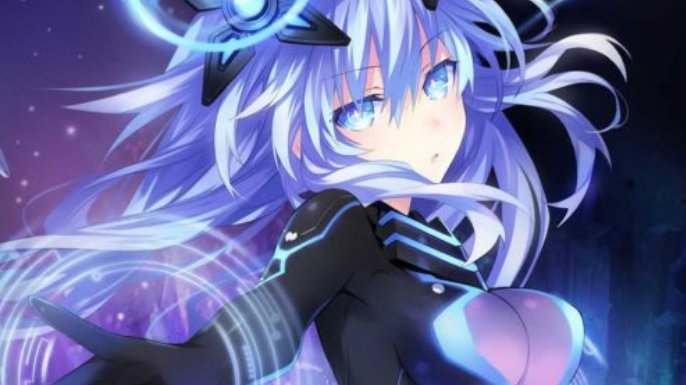 There’s really not a reason to purchase the game a second time, however. Nothing has changed from the original title. I thought perhaps the game would incorporate some touch controls, no matter how creepy that sounded, but no, Compile Heart did not opt for that. It’s the exact same game, just now on the Switch. If you just loved the game the first time and want it on a mobile device too, then you’ve probably bought it anyway. I’m not one to judge, as I own Phoenix Wright: Ace Attorney Trilogy on three devices.

But if you’ve never played, then there is plenty in here to enjoy. The Hyperdimension Neptunia series has always had brilliant commentary on the gaming industry and culture as a whole. Its entire idiom is based upon CPUs that are actually young girls running various nations in the world of Gamindustri. Each character directly represents a specific gaming company, and since this game travels to alternate dimensions, those dimensions also represent specific companies. 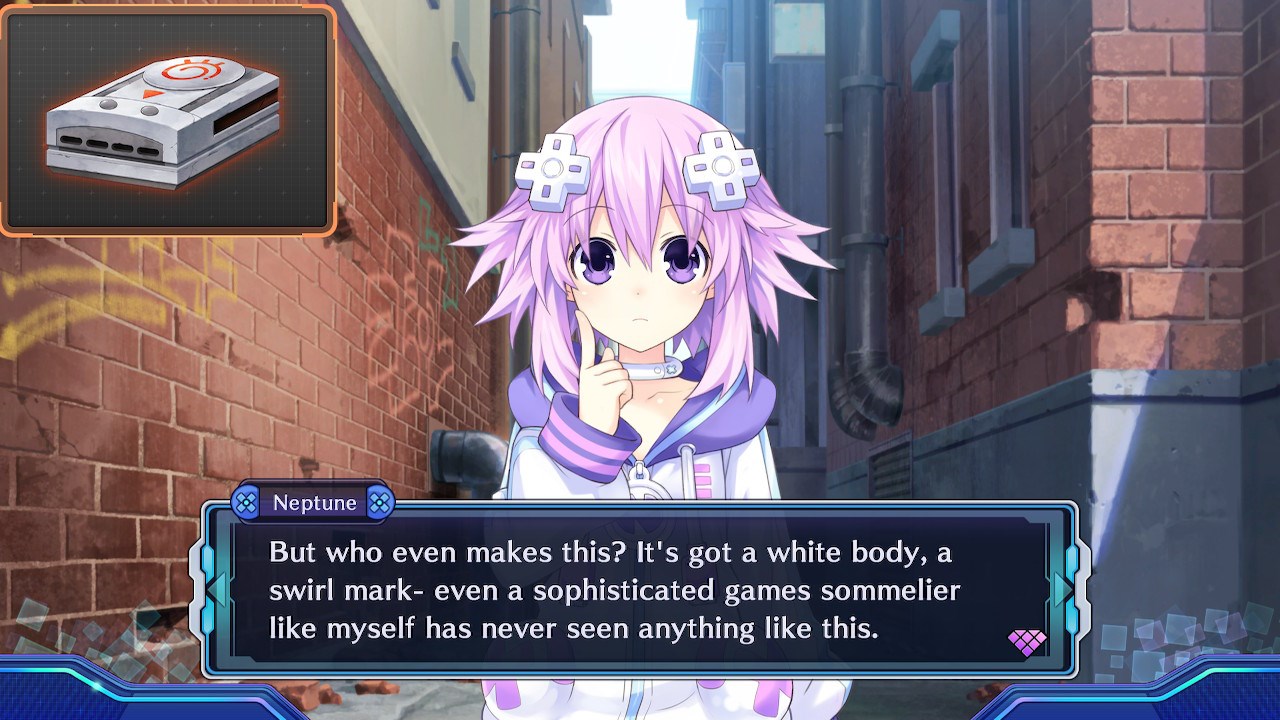 What on earth could this be referring to?

The snark is absolutely amazing throughout, especially when the CPUs all get together and comment on their respective gaming societies. I barked a laugh more than once when girls chatted, especially when they spoke with the CPUs from the alternate dimensions. The girls constantly poke fun at the structure of games in general, mentioning protagonist plot armor, how combat works, etc. It’s always refreshing to find a game that pokes fun at itself. In this time of a pandemic, we need this kind of entertainment more than ever.

It’s a good thing that the dialogue has its funny moments, because the combat in Megadimension Neptunia VII Switch doesn’t break any innovation molds. The combat is ye standard turn-based JRPG faire with some action mechanics woven in. For each character’s turn, you have your usual options of defend, attack, skill, item, or run, but you can move the character across the battlefield before selecting your option. This way, if you want to use a pretty powerful skill, you can line up your AoE to cover multiple enemies if they line up. They may not line up, because they can run all over the battlefield too. Because of this ability to move on the field, it’s incredibly important to move the character to the most ideal position. Attacking from behind will score more damage than from the front, some attacks can hit multiple enemies if lined up correctly, and sometimes it’s best to move your character far away from the action to give them a breather to heal. 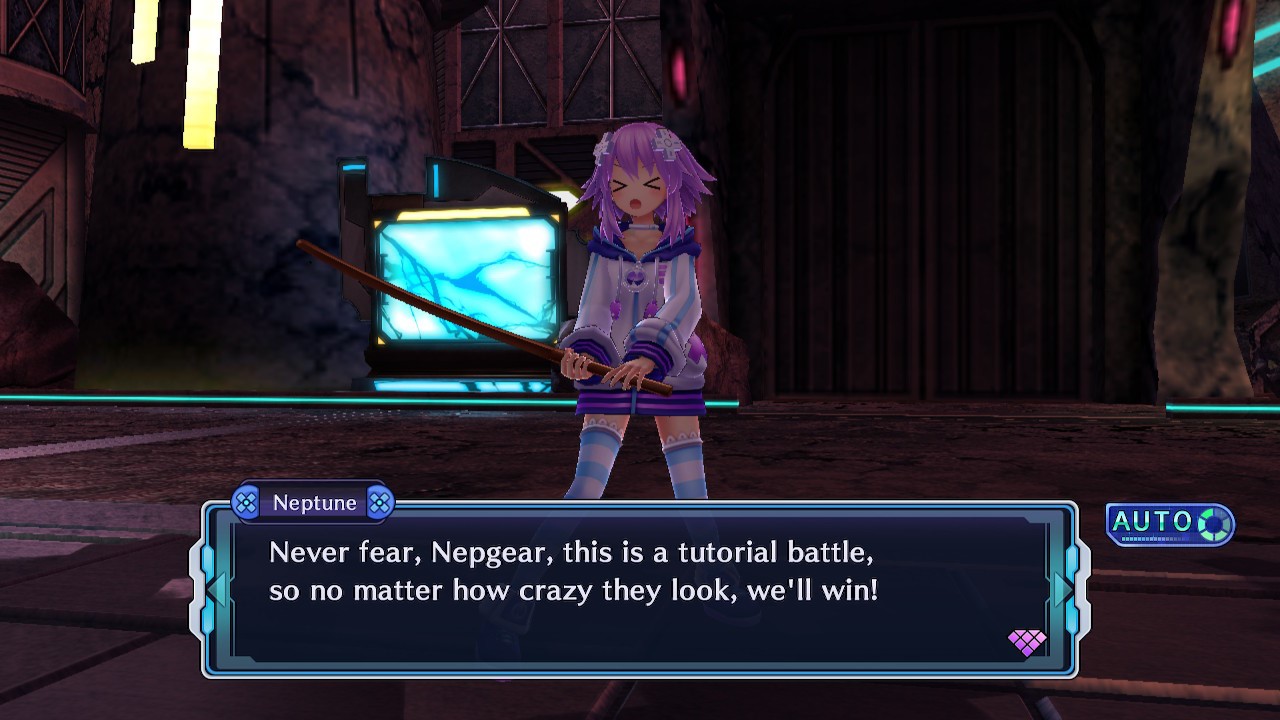 It’s true that the tutorial battles are easy and don’t require much strategy, but as soon as you finish the early fights, it’s time to focus on your party’s formation and character positions. Because the positioning is important, a battle can’t necessarily be won purely by upgraded gear or grinding for levels. Yes, these definitely help, but coming up with a better positioning strategy will at the very least limp you through a boss fight if you don’t have the best gear or don’t feel like grinding through that dungeon for more XP. Or, in a real case, you accidentally sell a character’s best gear because you didn’t realize that they unequipped it when they temporarily left your party. Really, who doesn’t take their gear with them? Any time I lost a battle or a boss fight, it was typically because I didn’t plan how to position the girls very well, and rarely because I hadn’t leveled up enough. Grinding in any game is bad enough, and since there really aren’t any side missions to assist with grinding, the idea of positioning was a nice cushion to avoid countless hours of repeat dungeon-crawling.

There may not be the need for repeat dungeon-crawling, but there are repeating boss fights, almost to the point of rage-quitting. It’s one thing for a particular boss to have different phases in a fight; it’s another to have to fight the same boss over six times in one chapter. In Zero Dimension, the first alternate dimension, I never believed I was fighting the final final boss because I had already battled her three times in a row, not to mention the other times we clashed. When the credits rolled, I still wasn’t sure it was over until the Hyperdimension Neptunia G menu screen popped up. These boss fights might have been tolerable if much changed between them, but they did not in any significant manner. In the end, it was a typical JRPG boss fight each time—slowly chip away at the HP meter, take breaks for healing, build your special meter to unleash a powerful attack, rinse, and repeat (that next shower scene is right around the corner!). 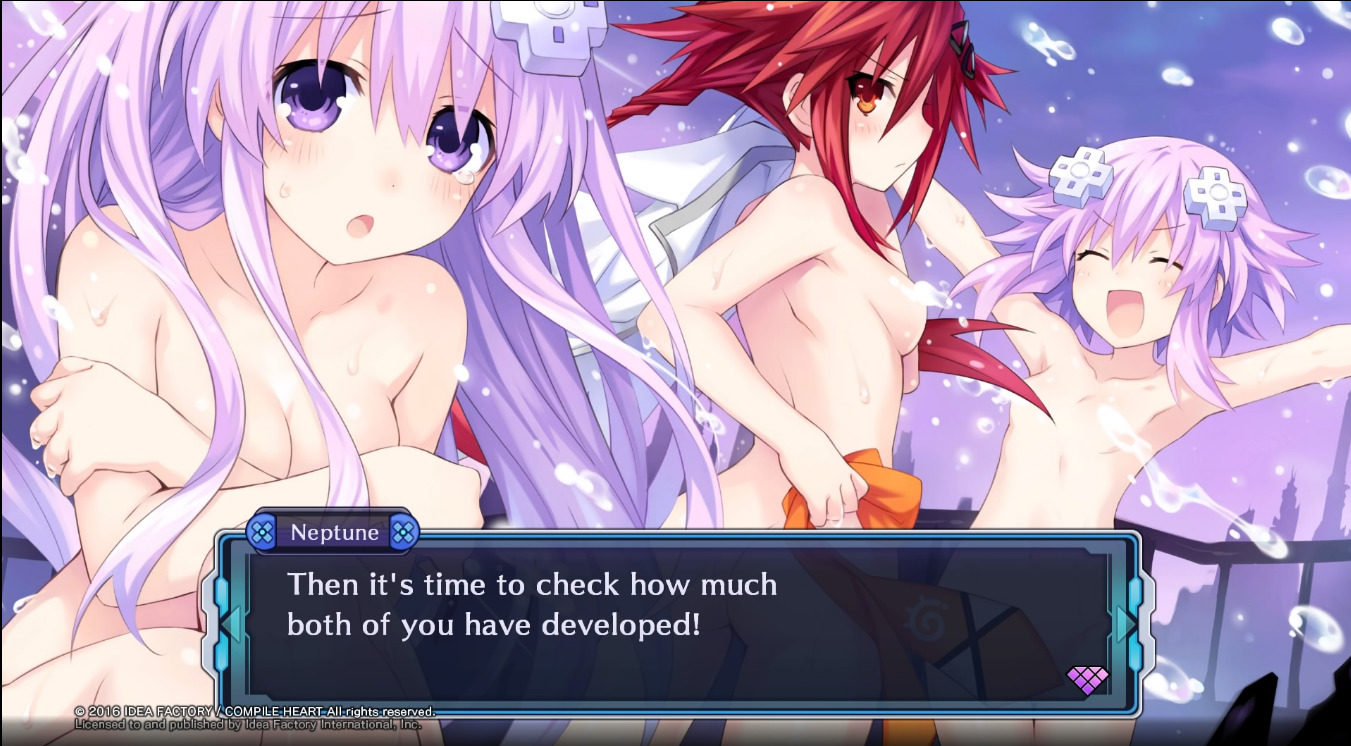 Megadimension Neptunia VII for the Switch is a mixed bag, with great combat elements and parody sadly shuffled together with overly padded plot, repetitive boss fights, and unnecessary nudity. Not to mention, the game has not aged well visually. It looks almost as bad as a PSP port to the PS4. Almost.

Megadimension Neptunia VII Switch is available worldwide. It is also available on the PlayStation 4 and PC.