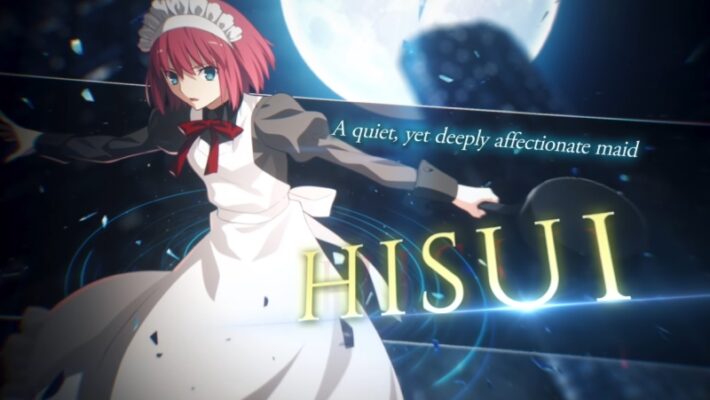 Though they were introduced to Melty Blood: Type Lumina as a pair, Hisui and Kohaku can both fight solo as well. Type-Moon Games showed off the evidence via Hisui’s battle preview trailer.

Hisui’s trailer shows off her abilities, via a fraught discussion of compensation with her employer, Akiha Tohno. As in previous iterations, the Melty Blood: Type Lumina version of Hisui asserts her right to a raise with a battle style that is best described as “lots of stuff.” Hisui wields frying pans, ladles, picnic blankets, priceless vases, and dining room furniture to control the space around around her. She’s a capable zoner-type fighter who can keep opponents at just the right distance to set them up for well-planned offensive combos. Hisui is even shown laying down a blanket, followed by a boxed lunch set as a trap, baiting her foe into stepping on it and taking damage. She also demonstrates her Arc Drive special move, which appears to be based on the Dark Jade Fist, a technique she demonstrated in the Kagetsu Tohya visual novel. Dark Jade Fist involves building up magical energy by rotating her arms and unleashing it with a powerful strike.

Hisui is the younger of the two maids of the Tohno household. On the surface, she’s quiet and reserved almost to the point of appearing unfeeling, but actually adopts this manner to conceal a deep well of emotion. She knew Shiki Tohno, the protagonist of Tsukihime, in their childhood, and was his playmate prior to becoming a maid for the Tohno family.

Melty Blood: Type Lumina will release on September 30, 2021 for the Nintendo Switch, PS4, PC, and Xbox One. Tsukihime: A Piece of Blue Glass Moon will release on August 26, 2021 in Japan.