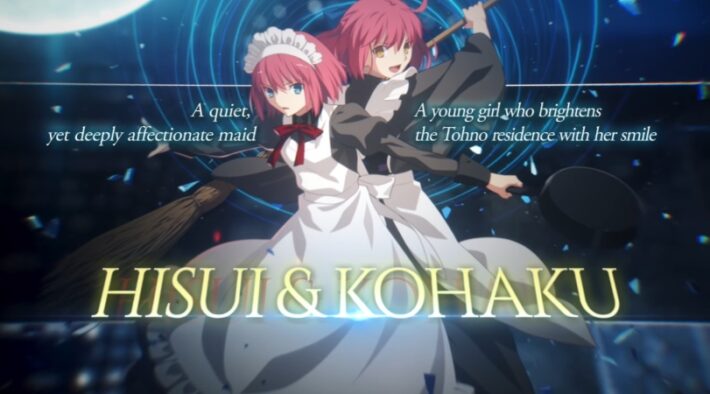 Why play one character when you can play two? Hisui and Kohaku, the keepers of the Tohno household, will be playable in Melty Blood: Type Lumina as the “Maids.” Their battle preview trailer was uploaded to the official Type-Moon Games Youtube account.

Though they’re selectable separately, the Melty Blood maids are shown in the trailer in their pair form. Players can select Hisui & Kohaku as a single unit with a bespoke move list. The demo shows them fighting a woman of the cloth named Ciel. The maids were renowned in earlier games in the series as one of the top-tier units. Skilled players could leverage the pair’s ability to attack from two sides and deploy various household objects to inflict unrelenting pressure on their opponents. This would make them vulnerable to combos and mixups, and that appears to be true in Melty Blood: Type Lumina. Players can also switch between the two maids in real time, “tagging in” either Kohaku or Hisui for direct control.

Hisui fights by whipping out various tools of improbable size and bulk, including an enchanted houseplant, a dinner table, and various chairs. Kohaku, meanwhile, wields her broom like a polearm and also surprises her foes with a variety of medicinal mixtures.

Though they’re technically twins, in demeanor and carriage Kohaku and Hisui couldn’t be more different. Hisui is the younger of the two and conceals a well of emotions behind a quiet, almost impassive affectation. Kohaku is constantly smiling and cheerful, but her bubbly personality hides a darkness born from deep trauma.

In Melty Blood: Type Lumina, the maids appear as they will in Tsukihime: A Piece of Blue Glass Moon and are also voiced by new actors. Hisui is voiced by Kana Ichinose, who played Darling in the FranXX‘s Ichigo, Dr. Stone’s Yuzuriha, and Final Fantasy XIV‘s Ryne. Kohaku is voiced by Yuki Kuwahara, who also played Miss Kobayashi’s Dragon Maid‘s Tohru and Fire Emblem: Three Houses‘ Hilda.

Melty Blood: Type Lumina will be available worldwide on the Nintendo Switch, PC, Xbox One, and PS4 on September 30, 2021.