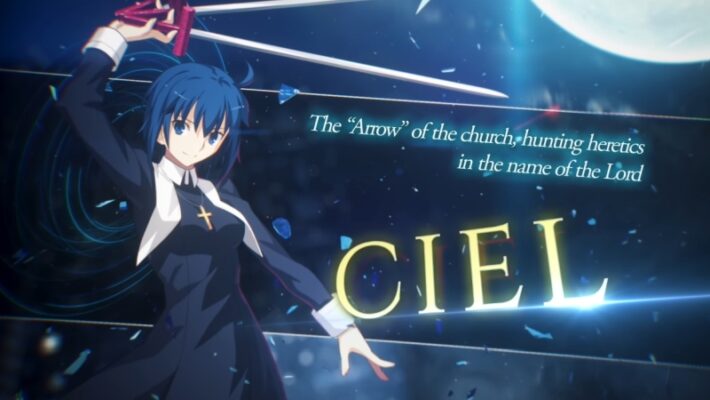 The new trailer demonstrates Ciel’s combat prowess and the skills that made her an ace member of the Burial Agency, a black ops branch of the Church dedicated to hunting supernatural threats, particularly vampires. Such vampires include the likes of Arcueid Brunestud, who had her own Melty Blood: Type Lumina battle preview appear. Ciel shows off her mastery of the many killing tools afforded to the Holy Church’s “dark side,” particularly the Black Keys, magically-empowered swords held between the fingers.

As in Melty Blood, Ciel can throw her Black Keys as projectiles, giving her a longer reach than previously demoed Type Lumina characters like Arcueid or Tohno. She also seems to have a number of diagonal aerial attacks designed to hit enemies at range from the air. For her Arc Drive, Ciel unleashes her ultimate weapon, a massive sanctified pile driver called the “Seventh Holy Scripture”. When using the Arc Drive, Ciel appears to discard her executor’s habit for a more practical sleeveless combat dress. In previous Melty Blood titles, a version of Ciel wearing this outfit and using the Seventh Holy Scripture exclusively was known as Powerd Ciel [sic].

Melty Blood: Type Lumina is due for global release on the Nintendo Switch, PlayStation 4, Xbox One, and PC on September 30, 2021. Tsukihime: A Piece of Blue Glass Moon, a remake of the visual novel Melty Blood is based on, will release in Japan on August 26, 2021. It will include Ciel’s route.