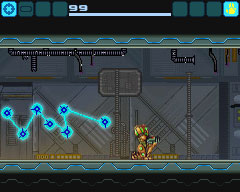 Metroid Prime on the Nintendo Gamecube was the first ever Metroid game to utilize a rather impressive first-person perspective (it was a First Person Adventure, it was), along with a mighty fine 3D engine. It also was an excellent game scoring a rare 97% over at metacritic. But, as MetroidHunter -a devoted and creative fan of the franchise- puts it: "Prime was different than all the other Metroid games because of its perspective. What would it have been like as a 2D sidescroller like the rest of them?" To answer said question MetroidHunter went on and started recreating the whole game in glorious oldschool 2D. Visit his Metroid Prime 2D site for the latest playable demo, screenshots, mockups and general info on the project. If, on the other hand, pure retro platform action is what makes you tick, then do have a look at them Rick Dangerous games.