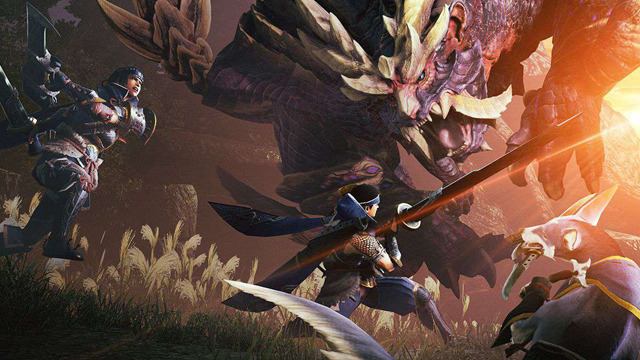 Monster Hunter Rise is the latest installment in the Monster Hunter series developed by Capcom. It has been immensely popular in Japan since its first release on the PlayStation 2, with the franchise ramping up considerably with the release of Monster Hunter World and its expansion, Iceborne. However, Monster Hunter Rise steps away from the larger scale and returns to a more classic experience with smaller maps, a more focused story, and a brighter player hub. While the game is smaller in scale, it manages to cement itself as an exemplary example of what the franchise is truly capable of.

Monster Hunter Rise offers two styles of progression through its Village and Hub Rank quests. These simultaneously cater to players who jumped into the Monster Hunter franchise through Monster Hunter World and series veterans that spent more time with the portable titles. I found myself gravitating towards the Hub quests, as they allowed for me to leap into action without engaging in the story to an extent. However, what makes these two branches different (outside of the Hub quest progression being somewhat more direct and without any clear tutorials) is their difficulty.

The Village quests are mostly concerned with setting up the story, and by proxy the player. An example is when you unlock the option to hunt Magnamalo, which is the flagship monster of Monster Hunter Rise. In order to unlock the Magnamalo, players will need to obtain Village Rank 4 before they can engage it through story progression. However, those who pursue hunter ranks through the Hub Rank progression will be able to fight the Magnamalo as early as Hub Rank 3. That single rank makes all the difference, and I felt this firsthand as I tackled the Magnamalo way earlier than I potentially should have. I walked away mostly unscathed and powered through the Hub Rank quests before deciding to dive into the story, which I quickly cleared due to having gear better suited to High Rank quests than Low Rank quests. 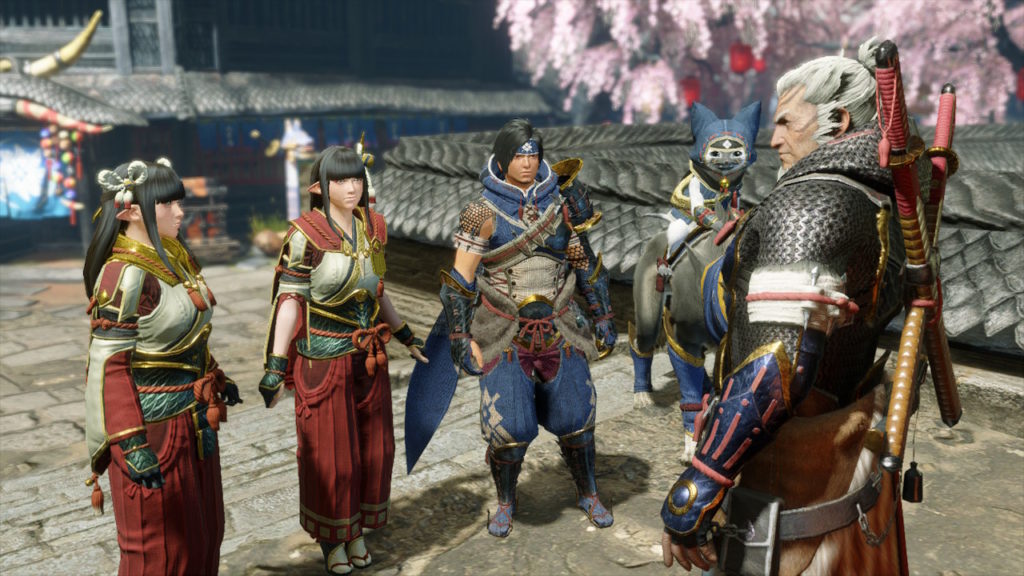 What makes the Village quests so unique are the short cutscenes that appear when hunting a monster for the first time. These cutscenes are short and draw direct inspiration from Japanese kabuki theater, with a narrator providing a short synopsis of the monster that either draws upon the appearance or background of the monster itself. Unlike the cutscenes in Monster Hunter World (which you can skip in Monster Hunter Rise), these are more engaging and help create a sense of believability in the locale and the overall world. These little nuggets of lore and their real-world connection to Japanese folklore and mythology felt refreshing. Everything ties neatly together with random collectibles that also provide records of hunters that came before you.

The story follows in the footsteps of previous Monster Hunter titles and concerns itself with the ecosystem of the world and the Elder Dragons that threaten the delicate balance. The characters introduced in Monster Hunter Rise are charming, are generally great to interact with, and don’t overstay their welcome. This is largely due to the localization that harkens back to older Monster Hunter titles. Characters have unique quirks and ways of speaking, and they are oftentimes zealous and energetic even in the face of certain defeat. However, they remain linked together by their sense of community, and Monster Hunter Rise makes this clear. Everyone contributes to the village in some way, benefiting from the skills and services everyone has to offer, mirroring the balance of the ecosystem the player engages with.

Monster Hunter Rise makes a small pivot away from items and food-based benefits, and instead leans into interacting with the various wildlife found in each locale. Collecting Spiribirds increases your health and stamina totals, which can make more arduous battles less challenging. You can also use insects and different types of amphibians to your advantage to hit monsters with status effects. While fighting the Nargacuga, I used a Blastitoad I had collected earlier to deal major damage to the monster, while simultaneously managing to knock it over. Doing these at the right moments feels extremely rewarding, as it can sometimes save yourself or party members from instant death. 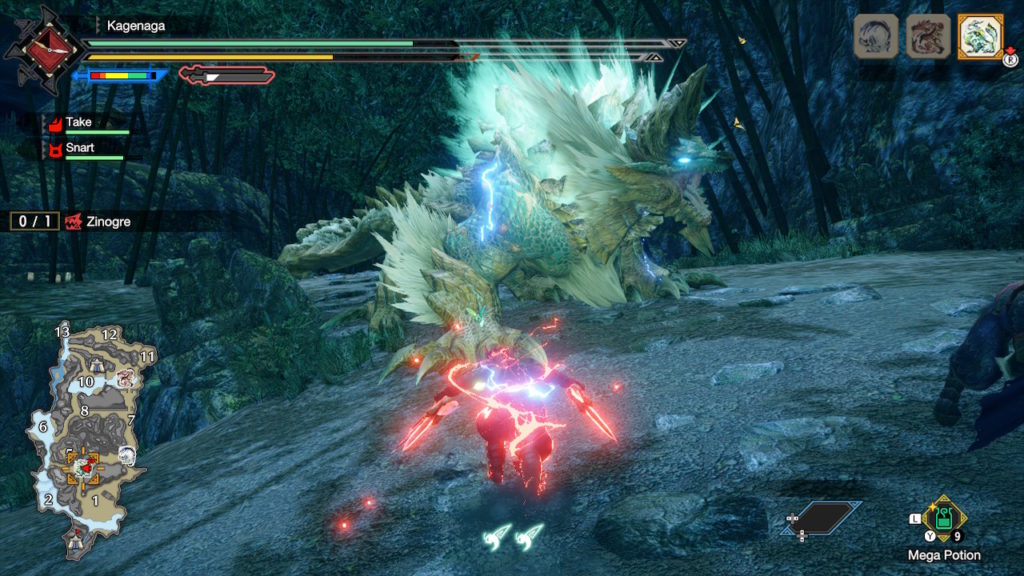 Regarding online cooperative play, the netcode is surprisingly good. I was able to remain connected to players located in North America while being located in Europe without any lag. Traversing the map was seamless, and there were no issues regarding rubberbanding while my Switch was docked. It honestly felt better than any experience I had playing Monster Hunter World on the PC. However, I did experience a bit of rubberbanding while playing with others when my Switch was undocked.

Everything about how the way Monster Hunter Rise functions is flawless. The controls feel tight once you adjust to them. I never had any issues with my hands cramping, which was a huge issue while playing Monster Hunter Generations. Traipsing through the environments using the Wirebug felt so satisfying once I had gotten the hang of it, both in and out of combat. At first I wasn’t sure if I would be able to grasp this new style of movement, mostly because I had struggled with it during the demo, but after a few hours I was leaping and bounding over small mountains while locating secrets littered throughout the game. Combat also feels incredible in conjunction with weapon skills unlocked through game progression. It really felt like the best of Monster Hunter World and of Monster Hunter Generations, as various quality life features are bundled into Monster Hunter Rise almost perfectly.

The new Rampage Quests were something I was admittedly dreading, since I didn’t like the siege-style quests in Monster Hunter World and Iceborne. However, the Rampage Quests are more or less a more interactive tower defense mode that allows players to actively participate in combat while managing installed elements. This mode was surprisingly fun, and I had no issue taking the time to gather materials or play through them a couple of times. Players can place installments on various locations throughout a total of three areas, using ballista, cannons, and other types of artillery to push back rampaging monsters. You can obtain various types of materials from the monsters you choose to engage with in Rampage Quests. The harder difficulties include Apex monsters, which add a whole new challenge to this new mode. They were definitely a lot more menacing, and I think these it will arguably be a lot more fun with friends when the full game releases. 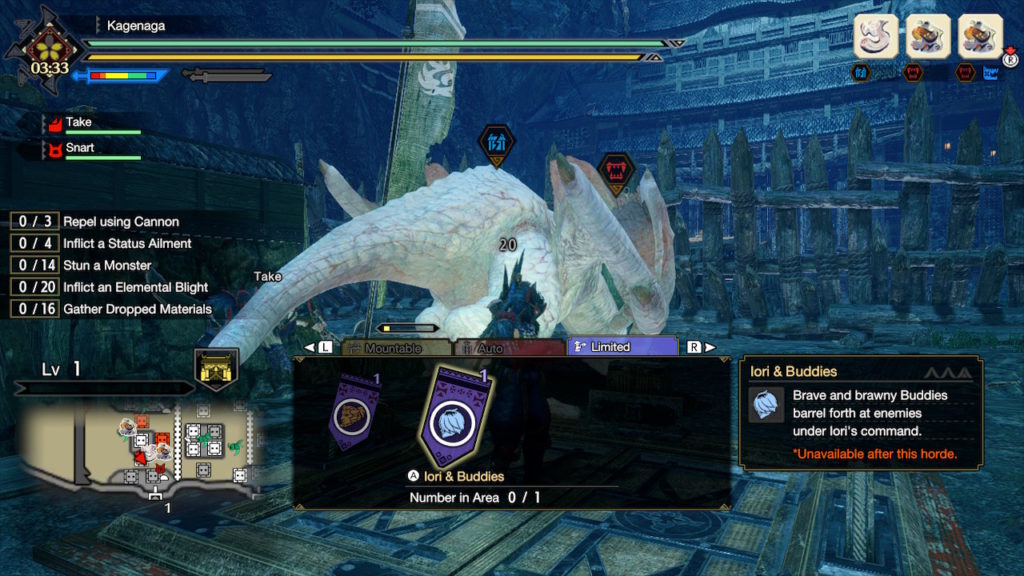 However, Monster Hunter Rise lacks any real accessibility features regarding its UI, which became a huge problem for me. Through the time I played Monster Hunter Rise before release, both of my eyes became bloodshot after extended periods of playing. Even resting the day after, my eyes would immediately become bloodshot again roughly four hours into a session. This issue is even more apparent when playing the game while the Switch is in handheld mode. The font is almost unreadable if you don’t have the Switch close to your face. While Monster Hunter Rise is a mostly perfect game, this is one of the things that holds the title back considerably.

Another issue is the lack of any real end-game content at the moment. While a future Free Title Update will wrap up the story, the player isn’t given much to do once you’ve completed the main scenario and all of the available Village and Hub Rank quests. This would be a bigger issue if this update wasn’t going to free or if Monster Hunter Rise was severely broken in any way. While the game feels mostly open-ended in its current state, I wouldn’t say it feels unfinished, as it has all of the polish you would expect from a AAA release. I completed all of the main scenario and optional content (this includes all of the side quests available in Monster Hunter Rise) in roughly fifty hours. The story took me a total of roughly forty hours to complete, while grinding, in tandem with the Hub Rank quests. Naturally, those who want to fill out their weapon and armor trees completely may take longer to complete the game, especially if they’re adamant about diving into the Rampage Quests.

Monster Hunter Rise is without a doubt one of the best Monster Hunter games I have ever played, if not the best outright. It caters to new and veteran players effortlessly, and while some accessibility issues holding it back from outright being a perfect game, it really offers the best of both worlds. Monster Hunter Rise continues to showcase the flexibility of the franchise, and that it has no intent on slowing down.

Monster Hunter Rise will release worldwide on March 26, 2021 for the Nintendo Switch. It will also come to the PC in 2022.

Set in the ninja-inspired land of Kamura Village, explore lush ecosystems and battle fearsome monsters to become the ultimate hunter. It’s been half a century since the last calamity struck, but a terrifying new monster has reared its head and threatens to plunge the land into chaos once again. Hunt solo or in a party with friends to earn rewards that you can use to craft a huge variety of weapons and armor. Brand new gameplay systems such as the high-flying ‘Wire Action’ and your canine companion ‘Palamute’ will add exciting new layers to the already robust combat that Monster Hunter is known for. Switch version reviewed.
9