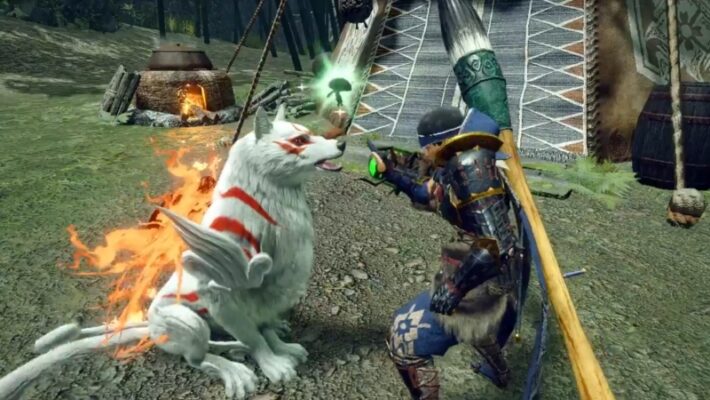 Capcom is adding Okami content to Monster Hunter Rise in the game’s latest cross-Capcom collaboration event. The collaboration comes as part of Capcom’s planned slate of downloadable additions to the game and was confirmed via Tweet from the official Monster Hunter account.

The tweet included a short trailer showing off the Monster Hunter Rise x Okami collaboration content. The event consists of a special quest that rewards the “Ammy Costume,” a layered armor set for the player’s Palamute that makes them look like Amaterasu, the lupine sun god that stars in Okami. The Ammy Costume causes the Palamute to plant trails of blooming greenery in its path when it sprints. The trailer also shows off some combat gameplay featuring the Ammy Costume. You can see the Palamute wielding weapons made to look like Amaterasu’s Glaive and Reflector gear. The player Hunter is also shown with an insect glaive made to look like a massive ink brush, a reference to Okami‘s paintbrush-based gameplay mechanics.

Okami is the second “Capcom Collab” addition to be implemented in Monster Hunter Rise. Developed by Clover Studio and directed by PlatinumGames founder Hideki Kamiya, Okami was originally released on the PlayStation 2 and Nintendo Wii. It was eventually ported to the PlayStation 3, PlayStation 4, Xbox One, and PC. In 2018, the game came to Nintendo Switch as well. Its sequel, Okamiden, however, has remained exclusive to the Nintendo DS since its release in 2011.

The Monster Hunter Rise x Okami crossover event begins on July 30, 2021.  The game is immediately available on Nintendo Switch. Other Capcom Collab add-ons are due in August 2021, and through the Fall season. Capcom added a Palamute based on the Zinogre earlier in July.