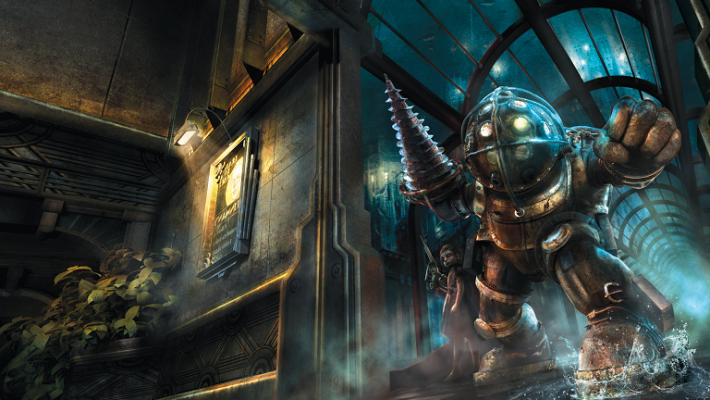 On Friday the Netflix Twitter account announced more details about its live-action feature film adaptation of the Bioshock franchise. Though it notes “franchise,” which implies that it will cover more than just the first game, the teaser picture shows Rapture, the setting of the first two games. It is likely that even if the movie focuses on more than the first Bioshock, it will not touch on events in Bioshock Infinite.

BioShock — our live-action feature film adaptation of the renowned video game franchise — will be directed by Francis Lawrence (I Am Legend, The Hunger Games: Catching Fire, Slumberland) from a script written by Michael Green (Logan, Blade Runner 2049, American Gods). pic.twitter.com/mDh4ut6ayJ

Francis Lawrence (I Am Legend, The Hunger Games: Catching Fire) will direct the movie, while Michael Green (Logan, Blade Runner 2049) will write the script. It is unknown who will star in the film, or any of the other staff. More information on that, as well as the release date, will appear in the future.

This is not the first venture Netflix has made in adapting video games for live-action film or TV. Just recently, it announced that it would cancel the Resident Evil show. The reason is because it did not perform as they expected. This is also the same reason why Netflix axed Cowboy Bebop after one season. Netflix is working on live-action adaptations of One Piece and Yu Yu Hakusho.

Bioshock first came out in 2007, and it is a first-person shooter set in the underwater city of Rapture. Founded in the 1940s by libertarian industrialist Andrew Ryan, Rapture was to be a capitalist utopia free from the restrictions of state control. The citizens of Rapture used ADAM, a substance harvested from a mysterious sea slug, to create plasmids, gene modification devices that bestowed fantastic superpowers. When Jack, the player character, arrives in Rapture after a plane crash in 1960, it is already after its isolated society has collapsed. Players will explore the city, encountering its twisted denizens and picking up audio logs to learn more about what happened.

The Bioshock Netflix live-action film is in production and more information on it will appear in the near future.