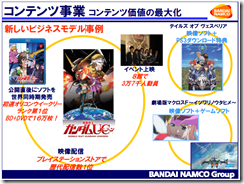 This slide is from Namco Bandai’s end of year financial presentation and it’s about maximizing the value of their contents.

One example of this new business model is the Tales of Vesperia Blu-ray download code bundle. The circle right below it has another example with Macross Frontier The Movie: The False Diva. It says movie + game software.

Huh, that’s interesting because there isn’t a game based on The False Diva. It’s been almost two years since Macross: Ace Frontier which was released on the PSP. We’re probably due for another Macross game anyway. The question is what platform will it be released on PSP or PS3/Xbox 360.