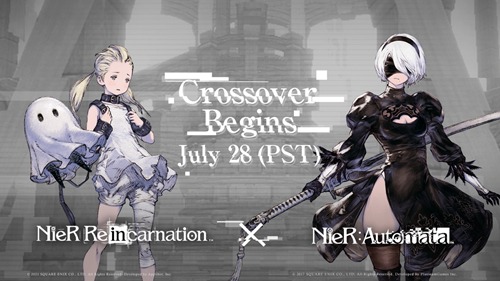 When NieR Reincarnation launches outside Japan, the global version will welcome people in with a NieR Automata event. When things begin on July 28, 2021, people like 2B will join the roster of original characters.

The event means people will be able to pull from a special banner in the RPG, which is also a gacha game. 2B, 9S, and A2, the three main characters from NieR Automata, will become playable party members in NieR Reincarnation as a result. There’s even a trailer showing off how they’ll look in game.

The example video shows all three in the same party. First, people get to see 2B fight. Then, we watch 9S use his skills. Finally, A2 gets a turn to attack.

This means the global version of the game is following in the footsteps of the Japanese one. In Japan, the game launched with the NieR Automata event active too. Since then, additional events with characters from games like NieR Replicant also appeared.

NieR Reincarnation will come to Android and Apple iOS devices worldwide on July 28, 2021, complete with a NieR Automata crossover event. However, Square Enix didn’t say how long the collaboration will appear in NieR Reincarnation. The game is immediately available in Japan.