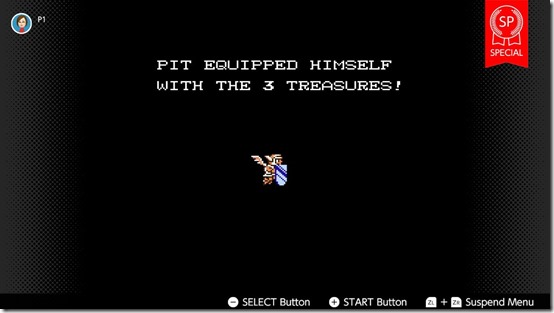 As is customary lately for Nintendo Switch Online NES game releases, a fourth secret one has arrived alongside the ones that were previously announced. In addition to Punch Out!! Featuring Mr. Dream, Star Soldier, and Super Mario Bros.: The Lost Levels, people have received Kid Icarus SP. This is a version of the game that gives players a jump start on the game.

Normally, as people go through Kid Icarus, they will eventually acquire the Three Secret Treasures before going to face Medusa. In Kid Icarus SP, you already have the Arrow of Light, Mirror Shield, and Wings of Pegasus. As a reminder, the Arrow of Light can pass through both enemies and environmental objects. The Mirror Shield keeps Medusa from turning Pit into stone. Wings of Pegasus allow Pit to constantly fly, rather than need to tap to hover very briefly. Since people already have all three of these treasures in Kid Icarus SP, this version of the game starts you off at the final level.

People who subscribe to Nintendo Switch Online gain access to the NES and Famicom applications that allow them to play all released games.