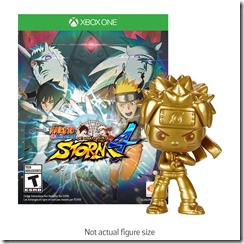 GameStop has its own, exclusive Naruto Shippuden: Ultimate Ninja Storm 4 bundle. The retailer’s option includes a copy of the PlayStation 4 or Xbox One version of the game and a gold Naruto figure made by Funko.

The Funko Naruto figure is about 3” tall, making him the same size as the Funko Pop! figures. However, his face is more detailed, and his pose is more dynamic. This figure will only be available in the Naruto Shippuden: Ultimate Ninja Storm 4 Limited Edition Golden Bundle.

The GameStop Naruto Shippuden: Ultimate Ninja Storm 4 Limited Edition Golden Bundle is $64.99. The price of the game outside of the bundle is $59.99. It will arrive on the PlayStation 4, Xbox One, and Windows PC on February 9 in North America. A PlayStation 4 and Xbox One demo will be released on December 17 in both North America and Europe.