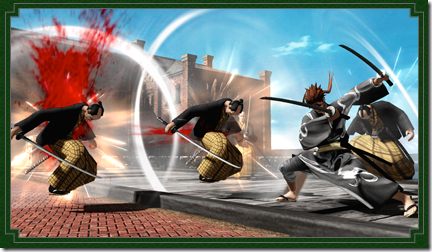 If you’re a fan of samurai cinema, Spike Chunsoft’s Patriot of Ukiyo and Ronin of Ukiyo sounds like it’d be right up your alley, as it has everything from time-stopping cuts to stylish finishing poses. The game’s latest trailer shows you more of the game’s action.

The video starts out with a look at both protagonist, with the PlayStation 3’s Patriot of Ukiyo getting an amnesiac Sakamoto Ryoma as the main character, while the PlayStation Vita version, Ronin of Ukiyo, has Okita Yoshijiro as the hero.

As previously reported, unlike games that often get simultaneous releases on home console and handheld, Spike Chunsoft’s two samurai titles will have different stories about historic figures in alternate pasts.

You can get a look at the game’s action starting at the 0:40, which is noted with “Kabuki Chambara”. To give you an idea of what that’s about, Kabuki is basically classical Japanese dance-drama, a word made by the words sing, dance, and skill.

Chambara, on the other hand, is a term used to describe sword fighting movies, or samurai cinema. Combine the two words together, and you get what you see, sword dancing in flashy cinema-like fashion in Patriot and Ronin of Ukiyo.

Patriot of Ukiyo releases on January 29 for PlayStation 3, and Ronin of Ukiyo will release on February 11, 2015 on PlayStation Vita in Japan.