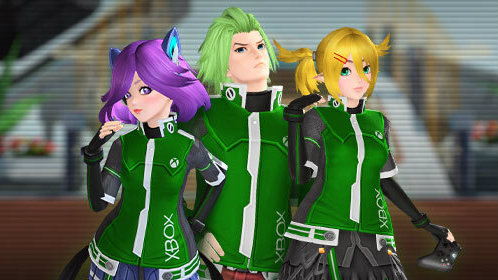 Back when the Xbox Game Pass Ultimate Perks program was announced, it confirmed that subscribers would be getting a bonus bundle to help them on their way in Phantasy Star Online 2. However, once things went live, people weren’t seeing the option for or being able to claim the reward code for it. (This happened even after it was supposedly fixed.) Now, things are completely working and the official site confirmed new reward bundle is even larger.

First, people who did get the first free Phantasy Star Online 2 Xbox bonus bundle will finally be able to get the rewards from that first compilation. (This includes cosmetic items like the Xbox Jacket and Xbox Wireless Controller accessory, as well as the different consumables.) That will be available until March 31, 2020 at the Visiphone, though it won’t be active just yet.

Next, people who didn’t manage to get the Phantasy Star Online 2 Xbox Game Pass Ultimate Perks reward initially will be able to again on March 31, 2020. That’s when the new rewards, which will include extra items, will be there.

Here’s the full list of rewards. Items added for this latest round will be notced.

The 30 day Premium Set subscription, Meseta Crystal, and 12 AC Scratch Tickets that were a part of the original bundle have been removed.

Here’s a closer look at the rewards.