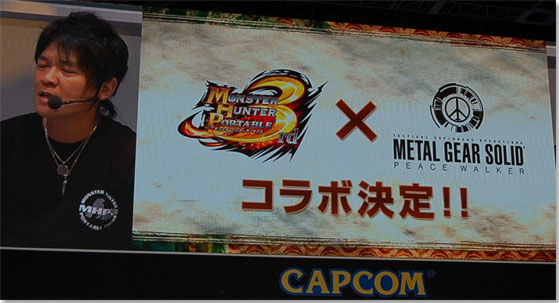 Capcom are giving Monster Hunter Portable 3rd the royal treatment. Not only has the game spawned its own Monster Hunter-branded PSP with significant hardware improvements, it now also includes Solid Snake — or Naked, as some of our commenters pointed out — and The Boss from the Metal Gear franchise as playable characters.

You may recall a previous tie-up between Konami and Capcom, whereby some of Monster Hunter’s recognized beasties made their way into Metal Gear Solid: Peace Walker as part of a series of side challenges. Now, Konami are returning the favour by allowing Capcom to include male and female equipment styled after Snake and The Boss in Portable 3rd. 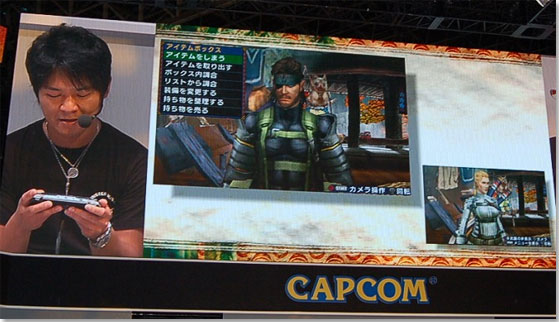 Judging from the pictures of Capcom’s presentation, however, you may as well just be playing as Snake or The Boss themselves. It appears that after equipping Metal Gear armour, your character will change to look just like them.

Additionally, your Felyne partners — who you can take along on quests in Portable 3rd — will be able to wear Metal Gear-inspired armour such as bandanas and sneaking suits, and will also be capable of hiding under cardboard boxes in the battlefield.

These features will be made available as part of a download pack after Portable 3rd’s release. Famitsu report that, upon hearing the announcement, the audience at Capcom’s presentation, unsurprisingly, erupted into cheering and applause.