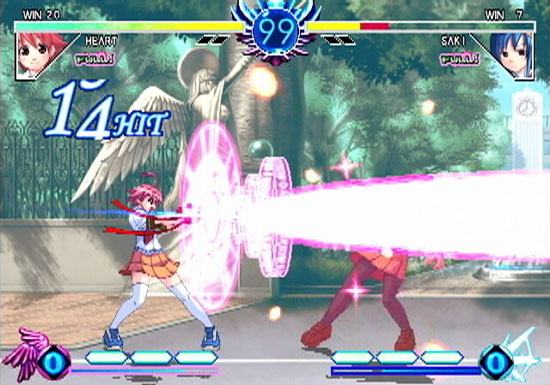 One of the main conflicts that comes with being a hardcore gamer is trying to balance the love for nostalgia and the desire to see something new.  Many times the hardcore gamer’s love for what he/she already knows makes it difficult for the gaming companies to release new properties.  Such is the dilemma with 2D fighting games.  Almost all of the games in this genre have been around for years.  Think about it: how many times have you seen something other than sequels to your favorite fighting game franchises in the last five years?

The big ones are Street Fighter, King of Fighters, and Guilty Gear.  For the most part, the niche is only big enough to support these three series.  Every once in a while we get a new series of fighting games based on a popular property such as Treasure’s Bleach games for the DS or Arc System Works' Hokuto no Ken (Fist of the North Star to the west).  However, these titles still aren’t completely new as they are based on something people familiar with Japanese culture already know about.  I know I’m not the only one that wants to see something completely new so I was glad to get the chance to examine Examu’s Arcana Heart, coming to North America on the PS2 care of Atlus. 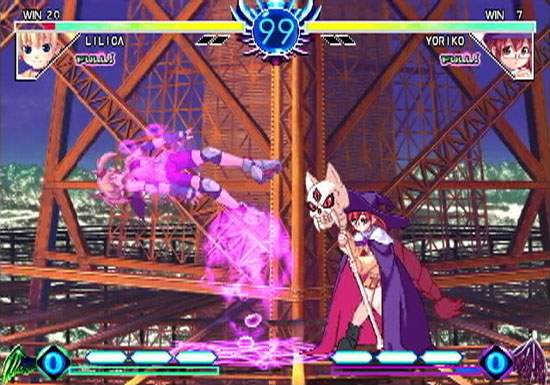 Everyone who knows anything about fighting games knows that a real test of 2D fighter lies in human competition so I hooked up with a couple of my buddies over at HG101 for a playtest.  We watched through the anime intro first to get an impression of what kind of characters we’d be using.  Arcana Heart is unusual in that it has an all girl cast.  In many ways, the game is much like an antithesis of what Hokuto no Ken is all about (which is all about being as sickeningly manly as possible).  Arcana Heart embraces the cute anime girl archetypes that we all know and love.  There's Heart Aino (which translates to "Heart Love") the main character, a school girl oozing in cuteness with a heart shaped curl in her hair.  Then, there's Kamui Tokinomiya who is a moody katana-brandishing goth girl.  Next up is a big breasted rip-off of Chun-Li in the form of Mei-Fang.  The character Konoha will definitely ring some bells with the people that have used Hokutomaru in Mark of Wolves.  I’ve seen all of these types of characters other fighting titles (some almost identically) and to be honest, not one of them really surprised me.  Well, except for one: Kira Daidohji. 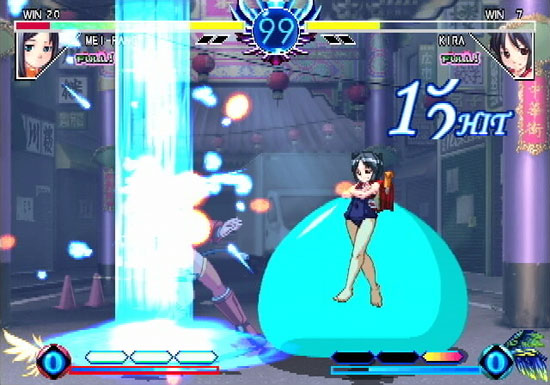 My friend Kurt Kalata describes her perfectly: "She's an embarrassment to Japan."  She's basically everything that Americans stereotypically define as Japanese weirdness shoved into one character.  First, she's a little prepubescent girl in a swimsuit, there to satisfy those of you that pre-ordered Doki Doki Majo Shinpan.  Oh, and she wears cat ears.  All the while she fights in this drop of goo, swimming and posing in it the whole time.  Ugh… 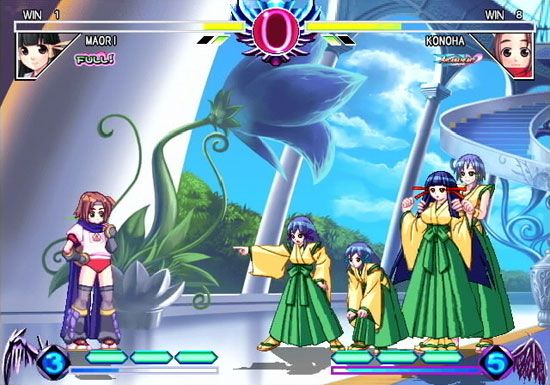 One of the fun aspects of the game that we found was the Arcana system.  Before each battle, you must pick a card that will be linked to your character’s special moves.  This system is interesting because in order to use your Arcana’s powers, you have to perform the same moves no matter which character you are using, therefore the Arcanas function as an equalizing factor.  The only one I seemed to get the hang of was Moriomoto, Arcana of Wood.  It has several quarter circle moves that are easy to pull off that include a moves that attacks with vines.  I'm sure there are more useful ones but I found these moves easy to remember and a good supplement to a character that doesn't have just quarter circle specials. 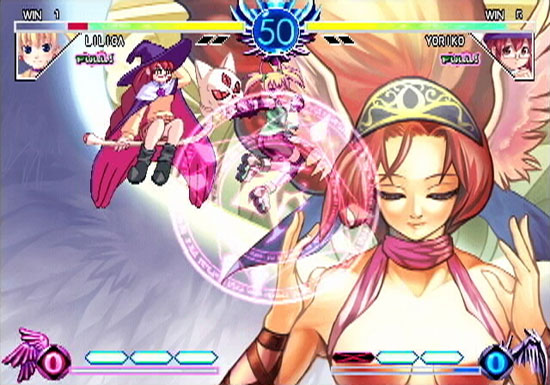 When we started playing, we recognized immediately that Arcana Heart feels a lot like Guilty Gear.  Arcana Heart has plenty of dashes (both air and ground), scaling backgrounds, high jumps, and even dusting.  It felt slow, though.  Not slow like Last Blade’s movement where attack placement is crucial, but slow in terms of how long it takes each character to do enough damage to each other to knock the other out.  We had a lot of matches where we ran out of time simply because our attacks (both normal and special) did so little damage to each other.  Personally, I’d much rather beat my opponent in a reasonable amount of time than rely on the timer to decide every battle.  Of course, I could turn off the timer, but I shouldn’t have to.  The timer should be there to raise the anxiety to finish the fight, not decide it.  I got the impression that a lot of the game relied much more on the timer than I was used to in a fighting game where characters could move with such ease.  The general consensus was that the game was competent in terms of programming and gameplay, but it didn't improve upon anything that we've seen in fighting games in the past.  We only got through a few matches before we decided to put the game down and go back to the likes of Samurai Shodown and Guilty Gear. 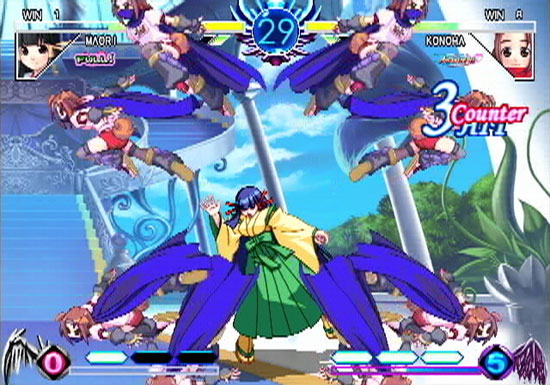 If you are interested in a Guilty Gear-style games, I’d say at least play Arcana Heart first before purchasing it.  It is a new property and has a doujin-style feel to it that many fighting fans have started to get a taste for since the import-only Melty Blood.  The characters are a lot of what you will probably be used to seeing and none of them will really have the personality and charisma of the characters in many of the other franchises.

Much like its cast, the game itself didn’t really stand out to me.  It plays without glitches and much slowdown so it is polished in terms of programming, but I can’t see why I’d play this over some of the other titles out there.  We were not huge fans of it, but the game has a decent following among the import community.  The game has some otaku/doujin fan appeal to it and if that’s your thing, then maybe it’s worth the $30 Atlus is asking for it.