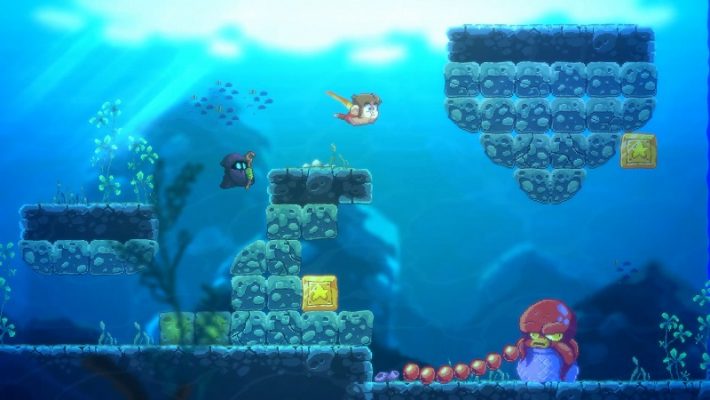 Alex Kidd in Miracle World DX is an unashamedly ruthless platformer. Originally on the Master System, it follows the title character in a quest to punch scorpions and die from being bad at rock-paper-scissors. There’s more to it than that, but you’d be forgiven for never knowing that because this game is the bad kind of challenging. With slippery controls, big enemy hitboxes, and a tiny, tiny attack, you’re going to likely spend most of your time repeating the same few levels and seeing your ghost floating out of your body.

A lot of the talk around this 80s platformer was about how hard it was. That’s not something that typically gets to me (I did review Ghosts ‘n Goblins: Resurrection), but for this title, you have a perfect storm of problems that shift its challenge into infuriating territory. It’s not THAT the game is hard, but WHY it is hard. Sorry if you were excited to get the game a bit earlier.

For starters, while the game’s site touts “tighter, more fluid controls,” what you end up with is a game that feels like it’s covered in oil. Alex Kidd in Miracle World DX plays like every single level is an ice stage, where Alex glides across (and usually off of) every surface. It’s very difficult to do anything with any precision, as you always seem to be blundering into an enemy or off a platform. This results in a whole lot of extra deaths unless you take every step as carefully as possible. Except sometimes you open a treasure and there’s a reaper inside who will chase you and kill you, so care has to go out the window. 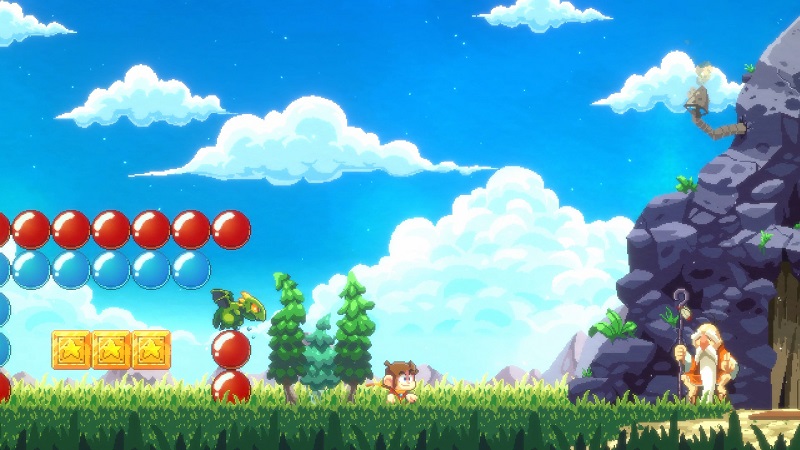 Now, this might have been manageable, but there’s more issues that make this annoying. The first is that the enemies have some big hitboxes. If I look to Ghosts ‘n Goblins: Resurrection (GNGR), when I got hit, I knew it and I felt I deserved it. Here, I’d often feel like I should have skirted by, or even missed (but I was still fairly close), but I’d still die. And since you die in a single hit, that unforgiving hitbox feels really frustrating. Especially so when you’re always slipping around due to the previous problem, dying because you can’t get Alex under much control.

You might have been able to deal with those two issues by being very careful, but you also have to deal with Alex’s piddling punch attack. Your attack doesn’t strike very far in front of you, so you have to get extremely close to your foes if you want to hit them. Which tends to get you killed due to their larger hit boxes. You can pick up special weapons that make this easier, but you lose them when you die, so don’t expect to use them for long until you get very good at the game. Between these three problems, though, I found my patience ran out before any skill kicked in. Plus, it felt like luck, more than skill, kept me alive while navigating the slippery world of Alex Kidd in Miracle World DX.

Strangely, that slipperiness seemed to calm a bit when I switched back to the classic game mode, which lets you play the old Master System version. You can do this on the fly with a button press, and here, I found the slipperiness was gone. The punching distance felt a bit better. The hitboxes weren’t as big. I’m not sure if it was the pixel visuals that give a clearer sense of where the hitboxes were, but the classic version seemed superior to the new one, as far as controls went. Which is very bad in a remake. 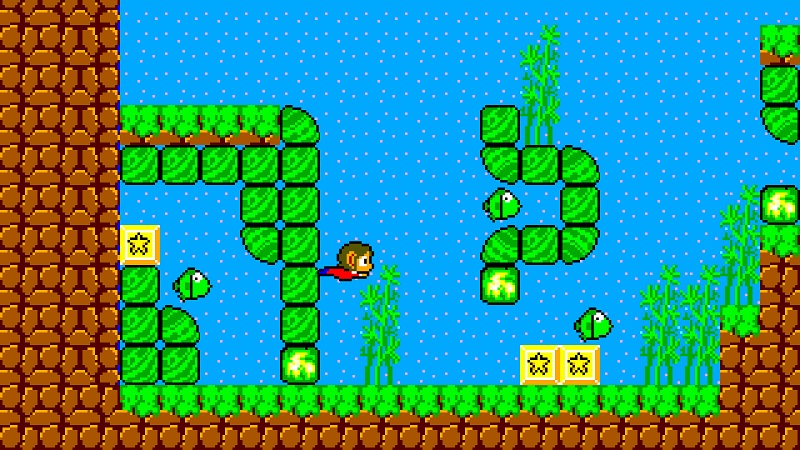 I’m not super sure I prefer the new visuals of Alex Kidd in Miracle World DX over the classic, either. The new art style does give the characters a great deal of cartoonish personality, and it definitely brings the environments to impressive life. However, there is a clarity to the original artwork that gets a bit lost in some of the muddy details of this art style. There’s something that feels a little fuzzy about the style, as if you’re seeing everything through a haze that honestly started to give me a headache after a short time playing. I want to like these designs, but the crisp pixel art, limited though it may be, just grants so much more clarity and comfort than the new visuals.

The original game definitely feels like it shows its age, though. Perhaps it’s because I don’t have any nostalgia for the original (but I also didn’t have any nostalgia for GNGR, either, and I enjoyed that), but the core game doesn’t feel all that compelling. Levels are short, but you die quickly, artificially inflating their length instead of actually balancing the challenge to feel fair. The enemies and locations are pretty dull. The power-ups are great, but get lost so easily that they feel pointless. Also, having to do a rock-paper-scissors game to win a boss fight was infuriating. It’s an ok platformer, which would have flown in the 80’s, but there’s so much good stuff being made in this genre that there’s just no room for something this tepid now.

Alex Kidd in Miracle World DX made for some of the most irritating platforming I’ve experienced in some time. With its slippery controls, large enemy hitboxes, and weak player attack, it’s miserable to play through the game’s stages (unless you turn on infinite lives, which kind of makes the game feel pointless). Since its look doesn’t improve the game, and the core game itself isn’t much fun, I can’t see anyone enjoying it besides the folks who grew up with it. And I can’t even see them sticking around for long when there are so many better offerings in the genre these days.