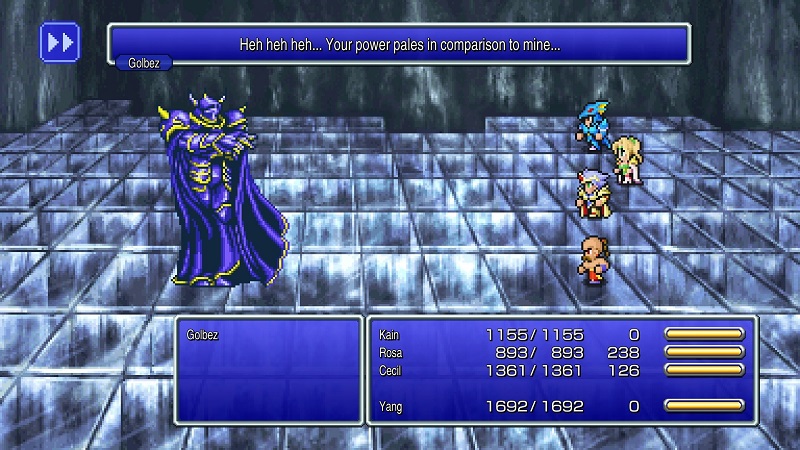 I went into Final Fantasy IV Pixel Remaster with very high hopes after playing the original Final Fantasy. That remaster felt like it completely reinvigorated that game with its gorgeous visuals, stunning take on the soundtrack, and an auto-battle system that made grinding levels and gold so much easier. Here, we see the fourth game get that same treatment, although the jump from the SNES is not as drastic. The changes feel more subtle, like a delightful companion to the original rather than something that feels like a definitively better version.

You get that sense from the very opening notes of the game’s theme music. Final Fantasy IV has what is easily my favorite soundtrack in the series, or at least the one that has stayed with me the most. The remastered opening track carries that same power, but there was something about it that felt off. The original game has a very definitive sound to it. Like a color palette for an artist, it felt like the original game drew from a suite of sounds that intertwined throughout the soundtrack. It’s like how the Quintet games like Actraiser and Soul Blazer have a distinct style. Likewise, Final Fantasy IV has a sound all its own, and that style is burned into my memories. The nostalgia is deeply entrenched, which made the opening moments of Final Fantasy IV Pixel Remaster somewhat odd.

The soundtrack was given a rearrangement under the oversight of original composer Nobuo Uematsu, and you can tell. The tracks all play like re-imaginings of the originals, exploring the music and taking the sound style to interesting places. There are things like a sweeping gospel organ bit in the rearranged boss track, and many of the other songs feel like they’re exploring the music and fleshing out its sound in creative ways. It’s interesting music and a delight to listen to, but I have a hard time listening to it over a soundtrack that was so formative to me growing up.

The visuals of Final Fantasy IV Pixel Remaster don’t take as big a leap as that of the Final Fantasy Pixel Remaster (unsurprisingly). Pixel art was looking pretty good around the release of Final Fantasy IV, so the additional detail here doesn’t feel as earth-shattering. Like the music, though, it feels like it gets to explore more of the details that were lost in the original. Kain’s armor and helmet gain better definition, the character features feel more prominent, and many of the monster designs feel just a bit clearer. I wasn’t swept off my feet, but I still found myself stopping to appreciate the new details brought to characters and places.

Auto-battle continues to make these games so much easier to play. Here you can tap a button to have the battle speed up, with all of your characters doing the last thing you instructed them to do. This is super useful if you want to use certain character abilities or just spam attacks in easy areas, although the prominence of back attacks and ambushes mean you need to pay a bit of attention. Likewise, if you forget you gave your character an odd instruction (like Row, which switches characters from back to front rows in times when they may have been back attack-ed), expect your character to keep switching rows until you notice.

This is especially true if you use some of the unique character abilities in Final Fantasy IV Pixel Remaster. Things like Cecil’s Dark Knight powers and Edward’s Heal ability bring a bit of variety that weren’t in the original release. However, some of these powers come at a some sort of cost (as I learned to my horror when I noticed that Edward’s Heal was using up all my potions), so again, don’t accidentally spam them for a half hour on auto. They add some flavor, although few of these powers are going to completely change how you play. It’s just nice to see them in action in this remaster.

The various tweaks to music, visuals, and play, even if they’d been terrible, would have a hard time taking away from the fact that this is just a fantastic RPG. This is the game that sold me on Final Fantasy and the genre itself, and its story and characters are still as captivating as they were decades ago. This game was unafraid to go to the skies, deep into the earth, and to the moon itself, offering an endlessly creative array of monsters, machines, horrors, and elemental creatures to battle against in each new place. It’s a journey of endless surprises, exciting battles, and courage on the part of its heroes, and it’s lost none of its ability to impress since it first released.

Final Fantasy IV Pixel Remaster may initially butt up against your nostalgia if you have fond memories of the original, but over time, I really began to appreciate seeing its visuals and sound explored in creative ways. I enjoyed seeing these new takes that built on what the original created, or that encouraged you to soak in the details and find a newfound appreciation of the old game. It reminded me how much I adore the original release, and it’s truly wonderful to see a new version out there drawing more people to this fantastic game so many years later.