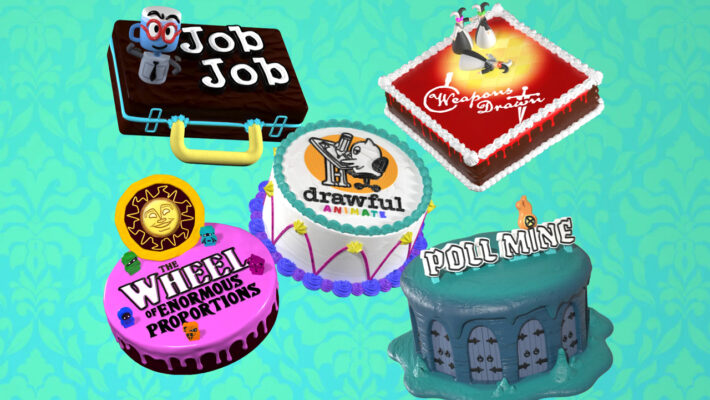 Are we really to Jackbox Party Pack 8? Yep, we’ve seen a lot of these over the years, but the nature of these packs has evolved. And in so many ways! Iteration has taken barebones ideas to something decidedly more complex. New games have moved from the obvious to the truly weird. And, perhaps most importantly for this installment, the world has become much more about video calls than house parties. The Jackbox Party Pack 8 is the first one fully developed in these conditions, and its collection of games feels like it wanted to be deeper and more involved to fit in a little better.

While there will be plenty of coverage of this pack’s large-group streaming capabilities, this review will, for the most part, focus on the experience for average players. Whether in-person or through video call, this is how most purchasers will likely play. 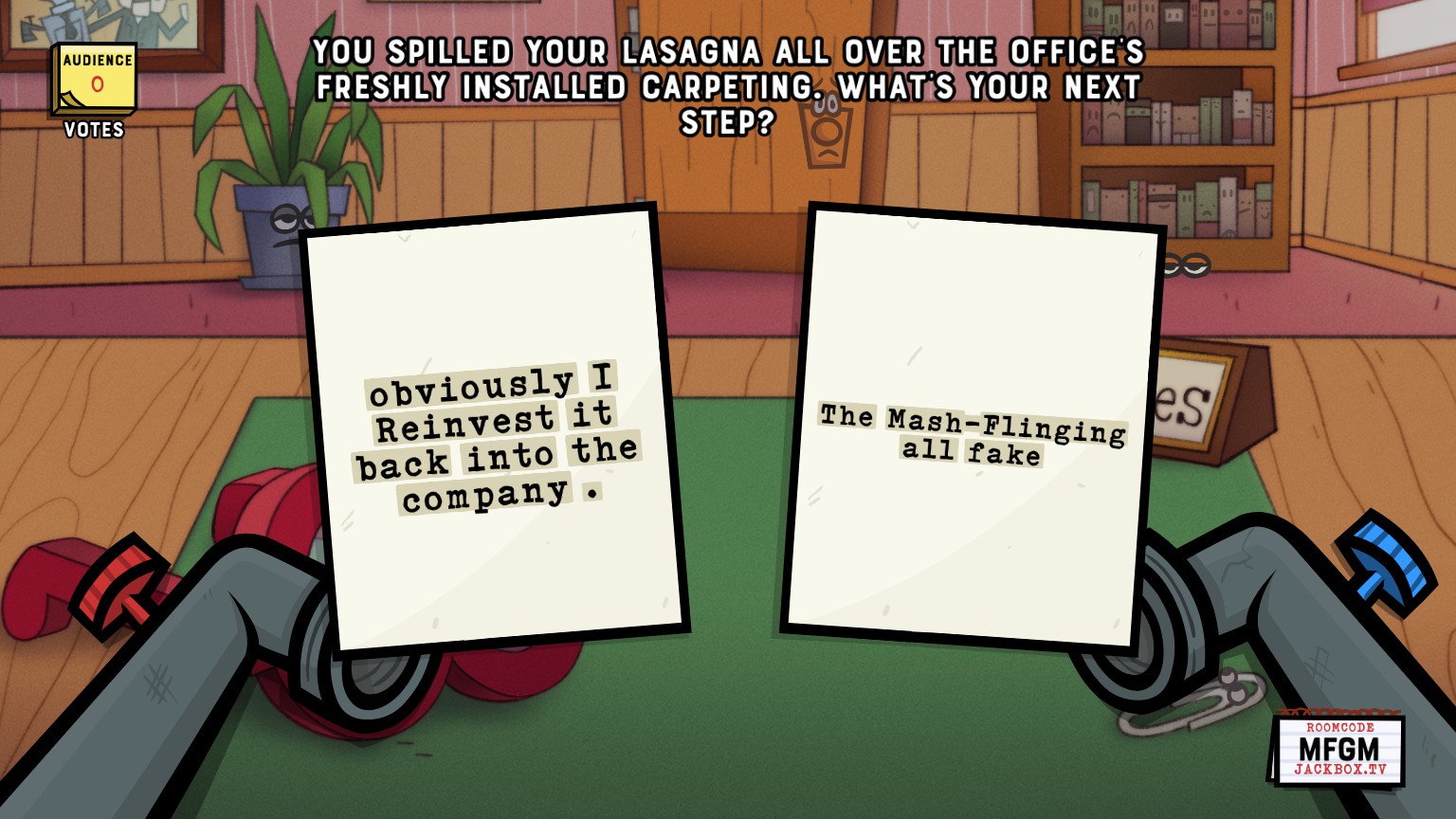 There are certainly archetypes for Jackbox Party Pack games, and the new installment follows them! Even through fresh ideas. So Job Job is the head-to-head, joke voting representative. Instead of Quiplash or the inconsistent Joke Boat, this challenge helps players along with providing some words. Or, rather, all the words? You respond to prompts only by dragging and assembling words from other players and the game itself.

It’s this limitation that makes Job Job shine. Whether you’re searching frantically for a preposition or taking advantage of your friend’s extended boat metaphor, it’s hard enough to make coherent thoughts! And that means they’re sometimes funny without a lot of trying. These joke games have always been great for the jesters in your play group, but Job Job does a lot to keep everyone else engaged too. 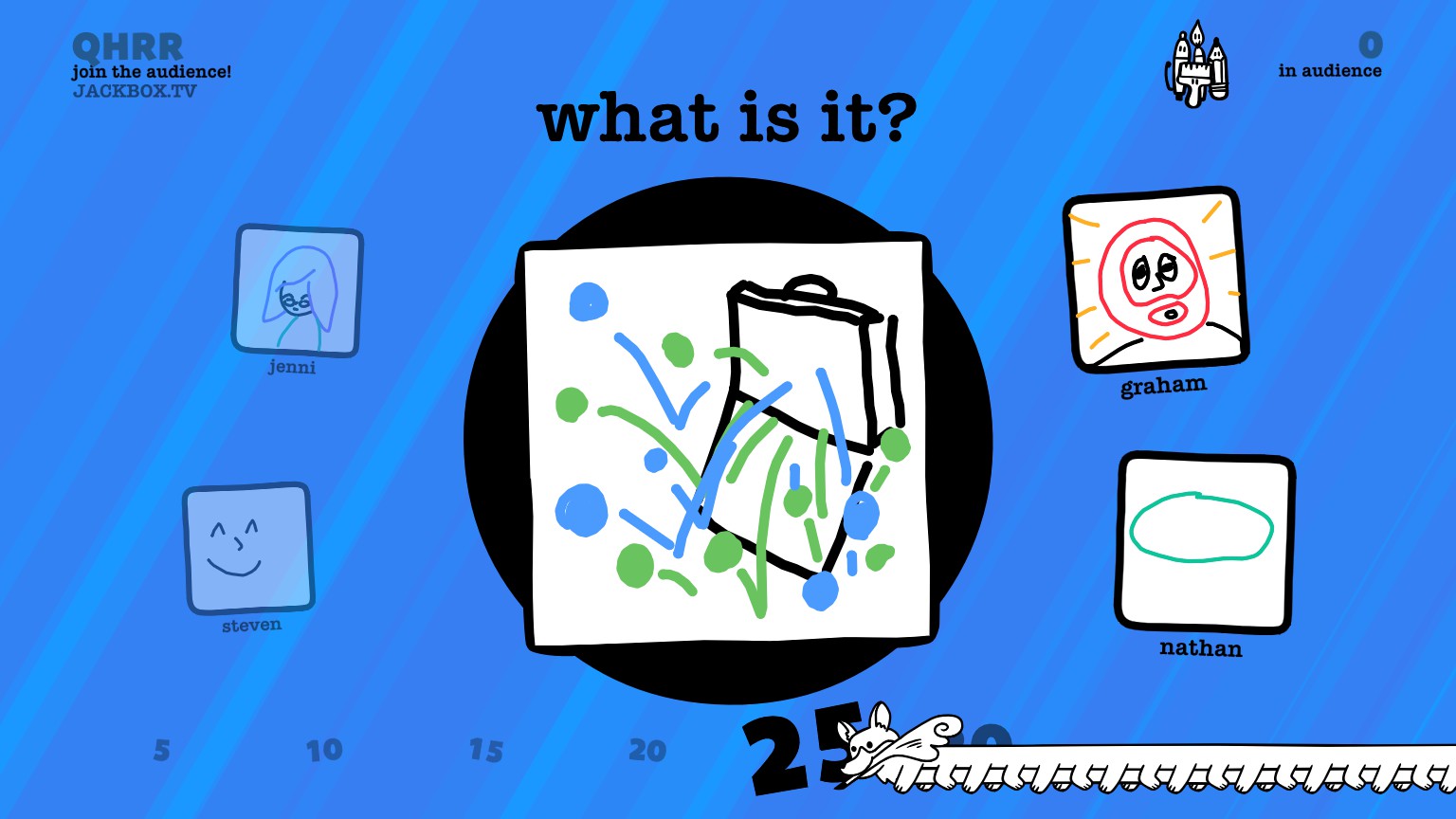 It’s the drawing one! You knew there’d be a drawing one. Drawful Animate brings two-frame animation to the well-worn Drawful formula. As such, yeah, there’s more drawing work to do. Still, ideas can come to life, even simple ones, with just a bit of action.

There’s not too much to explain about Drawful Animate if you’ve played another game in the series. But hey: it does change the pacing. Drawings take a bit longer! If your group has gotten comfortable with the Tee K.O. formula of quietly prepping for a while before a quick payoff, it won’t seem so bad, though. And that is something of a theme throughout The Jackbox Party Pack 8. It’s less about introducing people to the format and more about providing varied options for existing fans.

All the games in the pack have clever, endearing visuals, but we’re calling out the centipede corgi that keeps track of time as a particular favorite. We love that little pal! 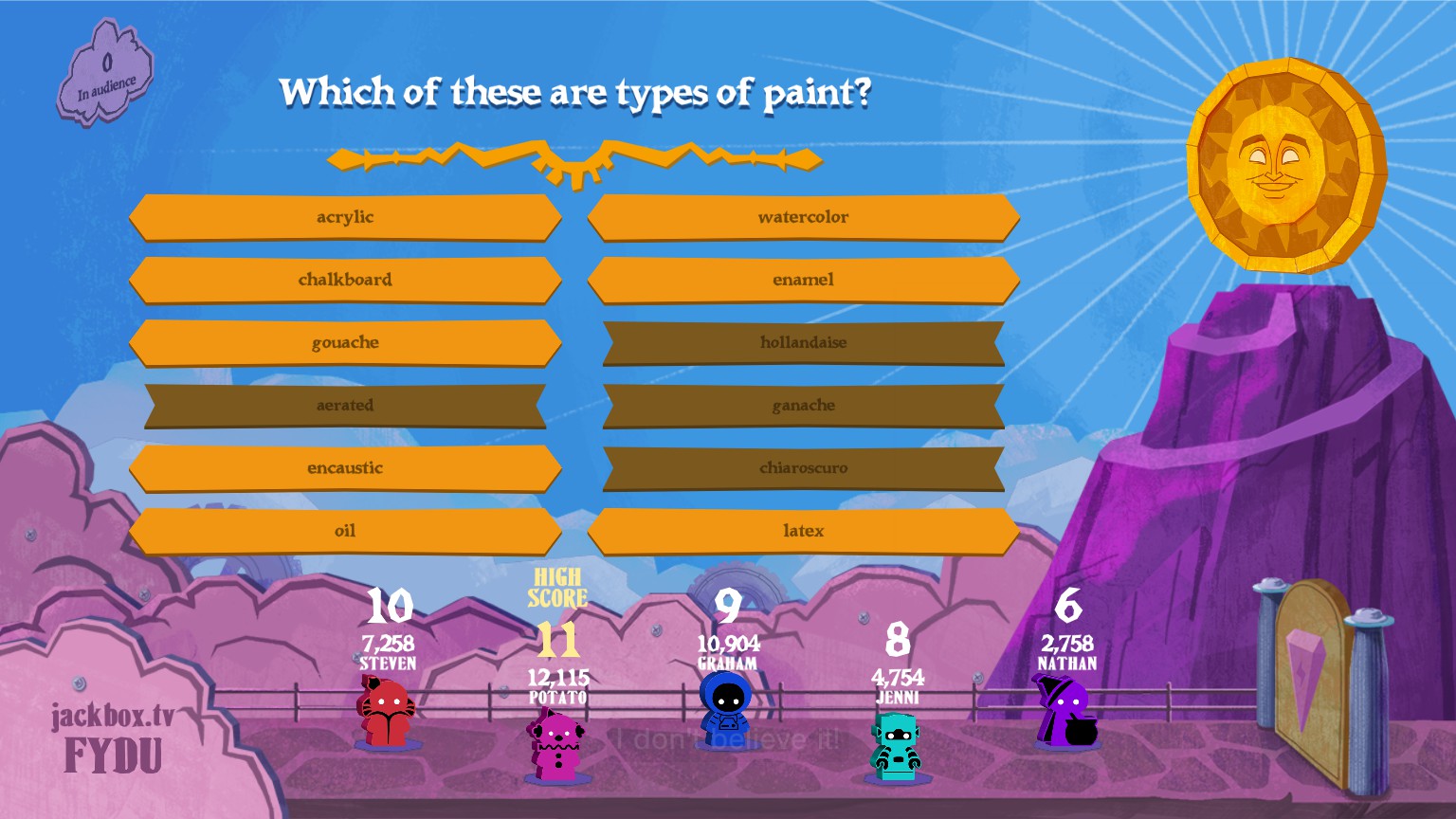 The Wheel of Enormous Proportions

Trivia! Jackbox wouldn’t be Jackbox without some trivia. The Wheel of Enormous Proportions is one part Wheel of Fortune and one part Legends of the Hidden Temple, adding spinning for points with a big ancient face that talks a lot. Questions can vary a bit, but the primary method is through selecting which items in a group fit certain criteria. The more you get right, the more points you get! But also you get more wedges to place on the wheel to earn you points.

The question segment of Wheel is really quite fun. It’s short, though? Perhaps a bit too short. And the wheel segment often feels like it produces too random of a winner to be a satisfying conclusion. The Jackbox Party Pack 8 continues the developer’s struggle to find appropriate endings for its games, throughout the collection. The middle’s the fun part, and we wish it were a little longer. (Or that the setup and finish were compressed somewhat.) 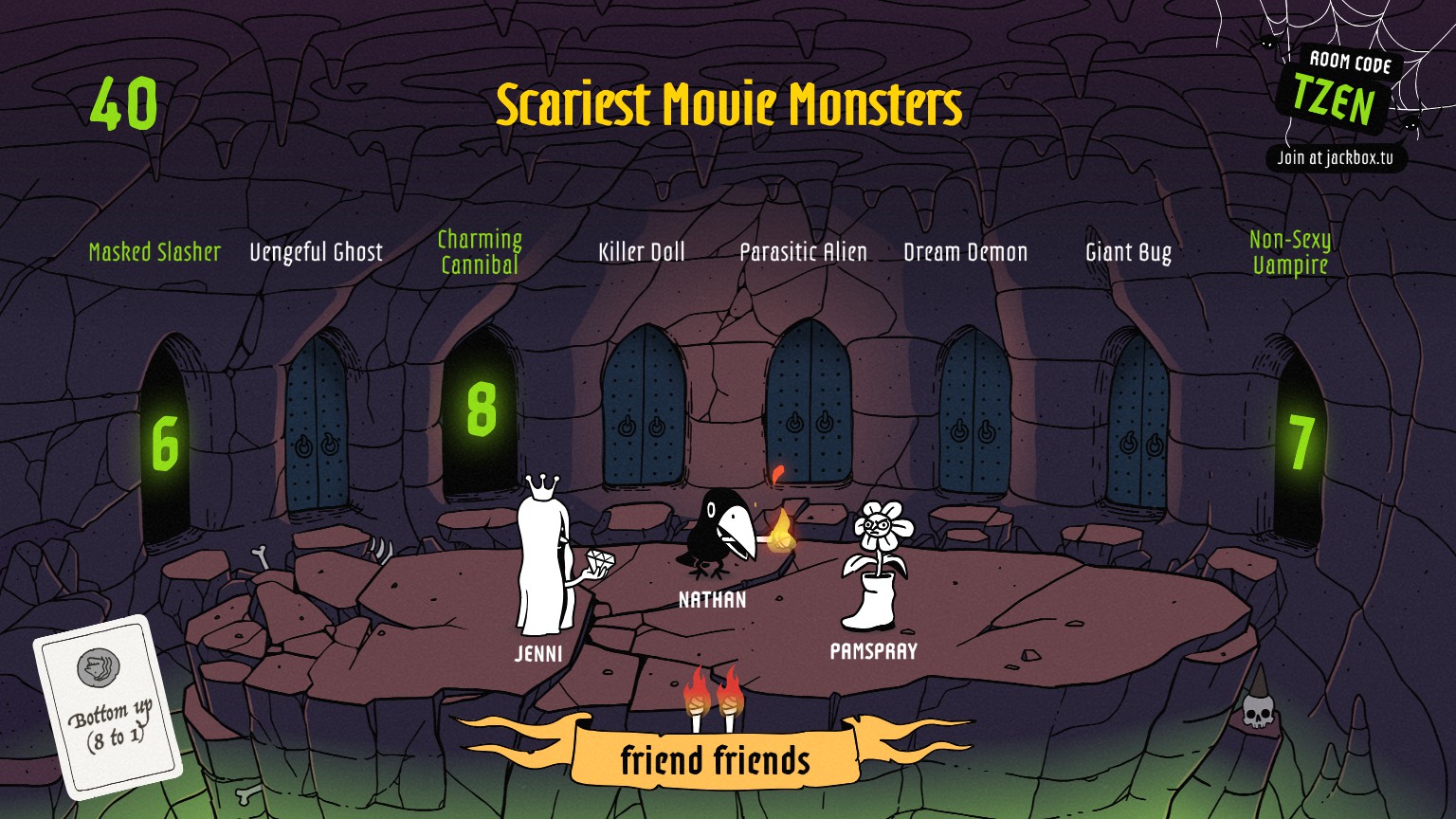 If there’s a “stream game” in the pack, it’s The Poll Mine, but it’s fun offline too. In it, you rank options in a set. Like bad lawn ornaments or scary monsters! This part feels a bit like party board game Gift Trap, forced to pick between things that are less than optimal.

From there, though, you’re divided into two teams and things feel more like Family Feud. Each takes turns choosing an option, hoping it was, in aggregate, ranked within a certain window. Like top three! Or two through four? Getting one right earns your team a torch, while missing loses you one. Torches are lives in the final round, and whichever group stays alive or gets out with the most torches wins.

The Poll Mine transforms depending on the context. A smaller group makes it more of a tactical game. Your team knows half of the responses, but saying things out loud will tip your hand to the opponent. A big one skews answers toward Guesspionage-style audience knowledge. 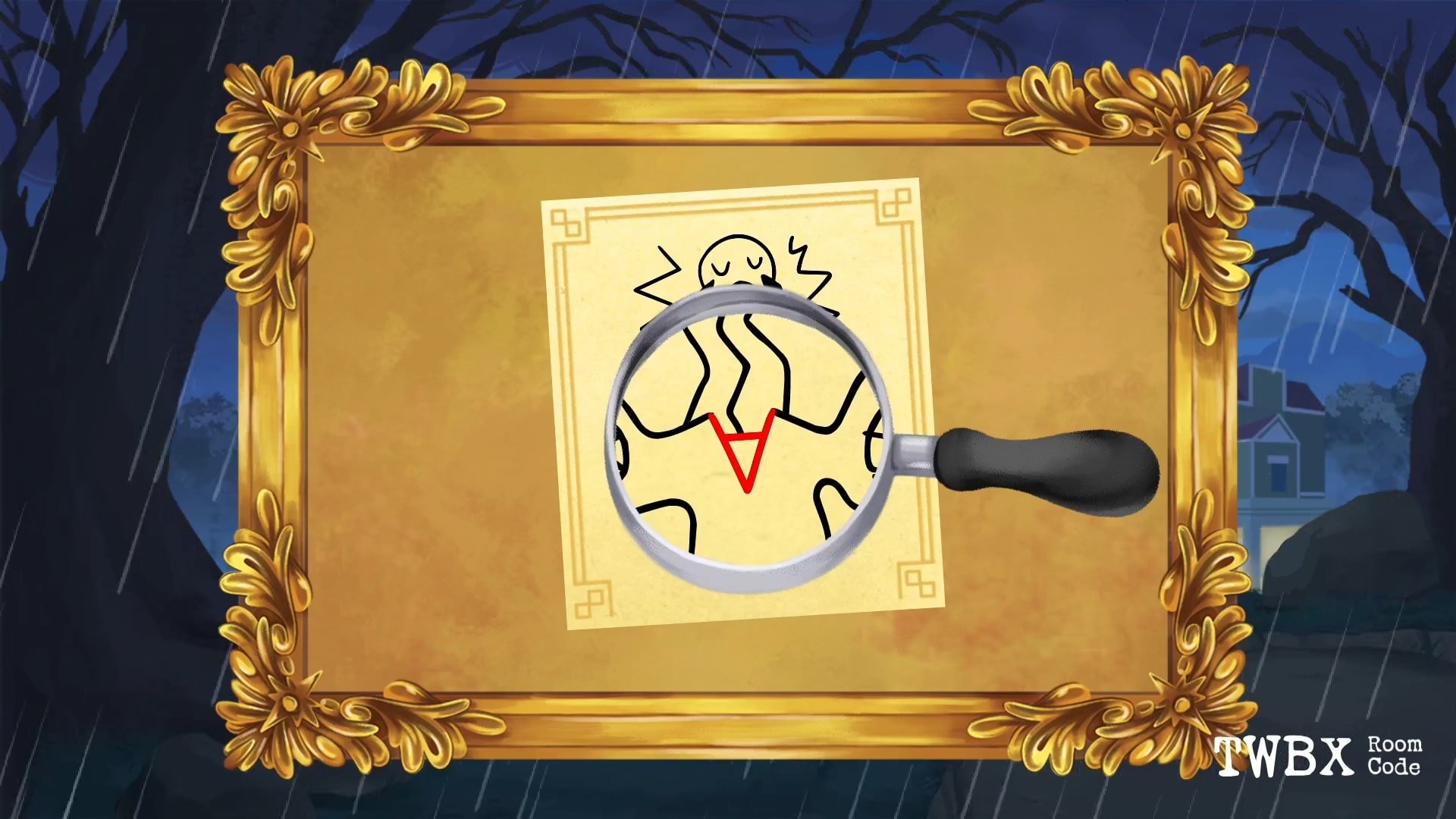 But, you say, wait! There was already a drawing game in this pack! Indeed, The Jackbox Party Pack 8 has two games about quick sketches. This one’s a bit different, though: you’re trying to hide a telltale letter in your art that will give yourself away. One letter of your username is picked as your calling card, and other players can compare art of a “murder” with another you did to try to spot it in both and catch you.

This game is honestly all over the place. There’s a naming of an accomplice that is tough for others to guess. There’s a voting about which art to investigate. (And then you loop around and do more of them anyway?) It never feels like Weapons Drawn knows entirely what it wants to be. Still, there’s some fun in trying to spot letters. The second round keeps the same letter for your art, but uses different writing styles to make it truly tough. We appreciate the ambition, but this one’s tough to get your mind around most of the time.

The Jackbox Party Pack 8 is the first one fully developed in today’s conditions, and its collection of games feels like it wanted to be deeper and more involved to fit in a little better.