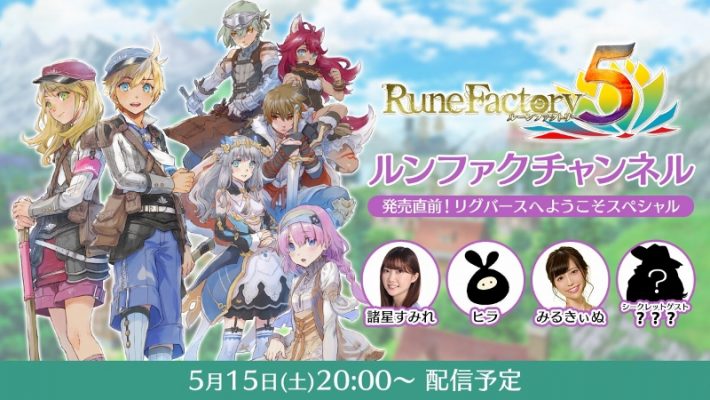 The stream will feature four Japanese guest stars. The first one is Sumire Morohoshi, the voice actress of Ludmila, one of the characters and marriage candidates appearing in Rune Factory 5. The next guests Hira and Milkiene, are Japanese streamers and known fans of the Rune Factory series. The last guest star is listed as a secret.

Marvelous published the most recent trailer for Rune Factory 5 in Japan in April 2021. In the trailer, the Seed Rigbarth division chief Livia introduced important locations and characters in the town. The game will also have a combat system featuring eight weapon types and a Seed Circle device that lets the protagonist control an enemy monster temporarily.

Additionally, Rune Factory 4 Special save data on the same console will unlock two guest characters for Rune Factory 5. Doug and Margaret will appear in the sequel through this method. They will return as companions that also bring new requests to unlock exclusive costumes for the protagonist, although they won’t be available as marriage candidates again.

Rune Factory 5 will appear on Nintendo Switch earlier in Japan on May 20, 2021. The western release currently still only has 2021 as its launch window.