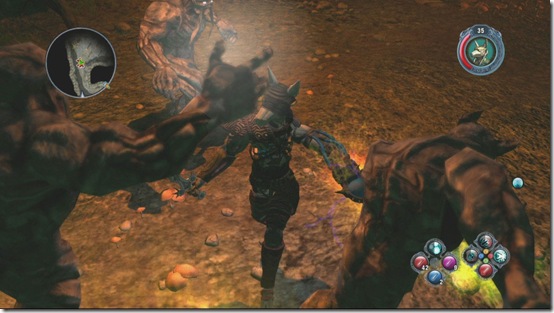 Hack and slash games on the PC are common and nothing to raise an eyebrow at. That’s why when Sacred 2 made its way from the PC to the Xbox 360, I was intrigued. The huge, sprawling world of Sacred 2 is so full of enemies who drop such good items that loot whores will definitely be pleased.

The game boasts different campaigns for each character class as well as different special skills depending on if the character is aligned with the light, or dark side. I chose to play an inquisitor, which seemed to be a good balance between offensive magic as well as physical attack skills. During the lower levels, I relied heavily on using weapons to deal with enemies.

Upon entering the main campaign, things can seem confusing. Almost everyone seems to have a talk icon next to them and they all want you to do something for them. For those who enjoy lots of side-quests, this is great. Me, I just wanted to get started with the main quest, so I followed the large arrow on the mini map which helpfully points to the next spot I need to be to progress the story. This arrow is a godsend for someone who gets lost very easily in towns.

Quests are as generic as fantasy hack and slack games go. Give X item to some guy. Go talk to some other guy. Come back and report what you said. Escort that other guy through some dangerous fields to the next town. I doubt most people would be playing Sacred 2 for its story, but if you’re one of them, there’s certainly lots of text, back story and a few humorous quips to keep you entertained.

Fighting in Sacred 2 usually involves just holding down the corresponding face button for whatever weapon you want to attack with. My typical setup was a sword as my main weapon, a staff, a spear, and then a ranged weapon like some hadouken-like projectiles. 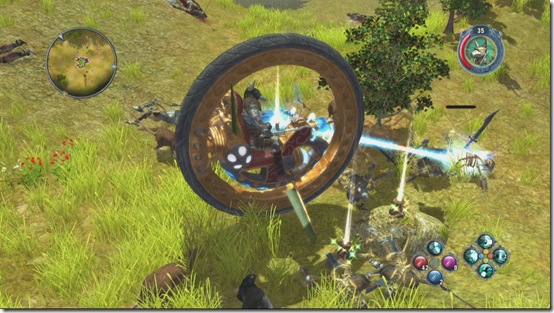 Unfortunately, despite the vast variety of weapons, most of the melee weapons feel the same. The game felt unpolished because switching weapons sometimes didn’t work well at all. I would attack an enemy with projectiles from far away, which is difficult to begin with because the game makes it almost impossible to aim those things, but once the enemies got within range, I would press the button which corresponded to my sword. Half the time, my character would continue to use the projectiles despite me not pressing that button any more. Maybe I needed to give my character more dexterity so it could switch weapons faster?

For a game with such a huge emphasis on loot, it’s surprising and annoying that the inventory system isn’t more streamlined. There’s no way to automatically or even manually sort items. Buying goods from a merchant is a pain because there’s no option to compare or try on anything. The user interface may be easier on the PC with a keyboard’s many buttons, but it just feels clumsy on the Xbox 360 controller. Even after I was familiar with the button layout, I still accidentally unassigned weapons when I was just trying to look at its stats.

So, Sacred 2 isn’t so polished. What it lacks in streamlined menus, it makes up for with tons of loot and lots of side-quests. Almost every NPC in town has a task for you to do. Each character’s campaign, side-quests, and gigantic world is bound to keep anyone who’s a completionist busy for months — or at least until Diablo 3 comes out. The inventory system certainly requires patience, but if you have vast amounts of it, the game may be worth giving a try. Maybe not at full price, but definitely when the inevitable price drop comes.