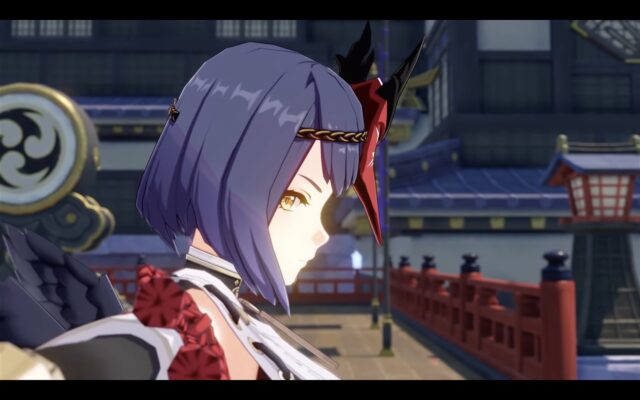 Every Genshin Impact character release also tends to be accompanied by a Collected Miscellany offering an overview, and Sara Kujou is the latest person to get one. In it, Dainsleif (voiced by Yuri Lowenthal) explains what to expect from this tengu.

Yes, tengu. The video begins by explaining Sara’s history. The Tenryou Commission General was adopted by the Kujou family and runs the military for the Raiden Shogun. People going through the Archon story quests will even see her involvement in the Vision Hunt Decree that takes Visions away from people. Also, as a hint as to her insight about Inazuma, her passive Land Survey ability allows her to completed expeditions faster in the region.

But as expected from a Collected Miscellany presentation, the video focuses on how Sara fights in Genshin Impact. It begins with looks at her normal attacks. As is common with archers, the charged shot is infused with her element (Electro). It also brings up how she’s a character who can use tactical retreats and electrical damage to assault enemies.

For example, her Elemental Skill Tengu Stormcall essentially teleports her out of harm’s way and provides Crowfeather Cover to protect her and allow her to perform charged shots more quickly. This also allows her to place a Crowfeather with a charged shot, which can trigger an ambush attack with Electro, an attack buff, and increased energy recharge. And her Subjugation: Koukou Sendou Elemental Burst essentially causes an AOE lightning storm to attack foes.

Genshin Impact is available for the PlayStation 4, PlayStation 5, PC, and mobile devices. A Nintendo Switch version is in the works. The Genshin Impact Sara Kujou banner will be around until September 21, 2021.