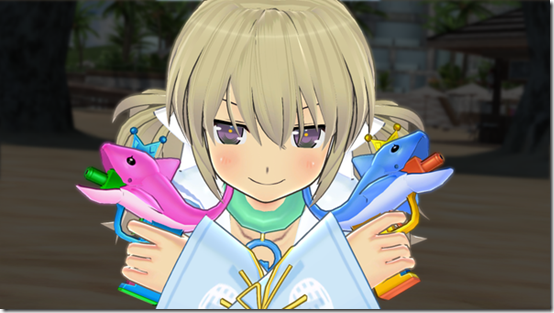 With Senran Kagura: Estival Versus’ release date nearing in Japan, Dengeki put together a lengthy gameplay video featuring their self-proclaimed “boob brothers” to show us various parts of its gameplay.

The footage starts at the 1:50 mark, where they show off the very basics of the game, which they say is pretty familiar to you’ve come to know from the series, with simple commands to take out a bunch of enemies, with flashy special moves.

You can get a look at a Tenshin transformation at 3:30, and the following gameplay. Next up, they show us more from the Locker Room feature at around the 5:40 mark of the video, starting with the Diorama mode, to check out characters in different scenery.

After about 30 minutes of careful planning, the Boob Bros. were able to come up with a scene, which is shown at 6:25. There are all kinds of different backgrounds to choose from, and you can also change camera angles to your liking. As the folks from Dengeki say, you can also share the images with fellow perverts from around the world.

Starting at the 8:00 mark, the three players show us a little more of the action from the game’s story mode, with what it looks like to take on various stages with different characters to show off more of their moves.

Finally, we get to see one of the new characters in Kafuru, at 20:50. She fights using pistols, but can also bust out with dolphins for different abilities to go with it.

Senran Kagura: Estival Versus will release in Japan on March 26, 2015 for PlayStation 4 and PlayStation Vita.